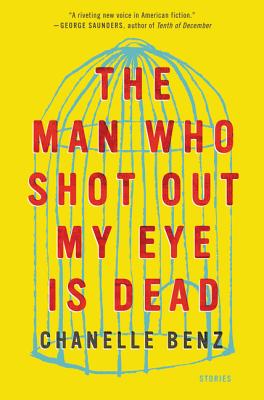 The Man Who Shot Out My Eye Is Dead

*LONGLISTED FOR THE 2018 PEN/ROBERT W. BINGHAM PRIZE FOR DEBUT FICTION*

Named a Best Book of 2017 by The San Francisco Chronicle

A stunningly original debut collection about lives across history marked by violence and longing.

A brother and sister turn outlaw in a wild and brutal landscape. The daughter of a diplomat disappears and resurfaces across the world as a deadly woman of many names. A young Philadelphia boy struggles with the contradictions of privilege, violence, and the sway of an incarcerated father. A monk in sixteenth century England suffers the dissolution of his monastery and the loss of all that he held sacred.

The characters in The Man Who Shot Out My Eye Is Dead, Benz's wildly imaginative debut, are as varied as any in recent literature, but they share a thirst for adventure which sends them rushing full-tilt toward the moral crossroads, becoming victims and perpetrators along the way. Riveting, visceral, and heartbreaking, Benz’s stories of identity, abandonment, and fierce love come together in a daring, arresting vision.


Praise For The Man Who Shot Out My Eye Is Dead: Stories…

“These are bloody, unredeemed tales told with wit and unbounded invention. It’s impossible to guess what Ms. Benz’s first novel will look like, but it’s one to be impatient for.” — Wall Street Journal

“Benz’s short stories reel you in...A gripping trip... Striking...You won’t have any problems turning the page, and, in fact, you might wish that each story was the beginning of a novel. Not a bad place to start a career in writing fiction.” — Houston Chronicle

“The Man Who Shot Out My Eye Is Dead” marks the debut of a startling talent; its opening story stops your breath — San Francisco Chronicle

“A mixture of semi-Gothic tales told in wide-ranging time and place, it presents a vision of a world stained and haunted by the past....Benz pulls the reader into this vortex of past/present with brutal skill and grace...an ambitious debut.” — Dallas Morning News

“Yes to Chanelle Benz and the skill, fluency and panache with which her voices interrogate and elevate narrative. There’s lots more I could say about these brilliant stories, but you’ll find out all about it and get your own joy when you read them.” — Helen Oyeyemi, author of Boy, Snow, Bird and What Is Not Yours Is Not Yours

“A strange and alien intelligence thrums throughout Chanelle Benz’s surprisingly deft and assured debut collection of stories. With humor and heartache, Benz demonstrates once again the elasticity of the short story and proves why it’s perhaps the perfect art form for our modern existence.” — Manuel Gonzales, author of The Miniature Wife and The Regional Office Is Under Attack!

“Chanelle Benz conjures startling, amazing worlds out of her fierce and wild imagination, out of her hard-cut sentences and through her strange and original characters. Her wicked intelligence and electric talent are evident in everything she writes.” — Dana Spiotta, author of Eat the Document and Innocents and Others

“Dazzles readers with its many different writing styles.... As Benz’s adventurers and dreamers attempt to remake their worlds in small and big ways, there are no easy happy endings here. Yet these lyrical stories capture the urgency of lives lived with daring and concern for others.” — Booklist

“A debut collection that spans centuries and oceans, Benz’s book skips from adventure to adventure for an action-packed, imaginative read. Her stories burst with thrills, but also lay bare the crimes, compromises and traumas that shape her characters’ lives.” — Huffington Post

“[Benz] writes with beauty and formal invention...To speak of her potential—which seems limitless—seems to do a disservice to the great work she has already done. She is going to be a writer to watch for years. The stories in this collection are vital, and it’s only the beginning.” — Electric Literature

“I’ve never read a story collection with as much range and imagination...Each story in this collection has a twist, a shock, and a gut-punch epiphany. Reading is firstly an act of discovery, and Chanelle Benz proves how startling and satisfying that journey ought to be.” — Ploughshares