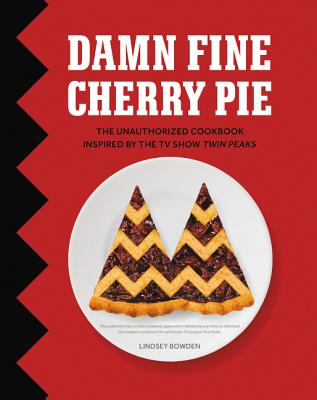 And Other Recipes from TV's Twin Peaks

Widely hailed as the best television show ever created, Twin Peaks has become a beloved cult favorite classic that continues to attract legions of passionate fans today. Twenty years after it first aired, the show’s influence can be see in all areas of popular culture, from television shows and commercials, to comic books and video games, to films and song lyrics. The show has also impacted popular culinary traditions; there are Double R Diner copycat diners, pop-up dining experiences, doughnut-eating contests, and David Lynch’s signature coffee.

Now, fans hungry for a Twin Peaks fix can sate their appetite with this quirky cookbook that pays homage to the show. Lindsey Bowden, the founder of the Twin Peaks festival in the UK, has gathered dozens of recipes inspired by its most memorable scenes and characters, including Percolator Fish Supper, the Log Lady’s Chocolate and Chestnut Roulade, and the Double R Diner's famous Cherry pie.

Inside Damn Fine Cherry Pie you'll find delights such as:

Ideal for viewing parties or a fun date night for two, Damn Fine Cherry Pie is a must for Twin Peaks fans, pop culture aficionados, and imaginative home cooks.


Praise For Damn Fine Cherry Pie: And Other Recipes from TV's Twin Peaks…

“Your home might not be the Great Northern Hotel, but with Twin Peaks superfan Lindsey Bowden’s cookbook, you can entertain like it is.”
— Bustle

“Along with a history of the show and craft sections, there are 80 recipes for dishes like Shelly Johnson’s cherry pie (of course), Dale Cooper’s ducks on the lake, and even ones contributed by cast members Al Strobel and Kimmy Robertson.”
— Grub Street

“Listen up, Log Ladies. If you love a good slice of cherry pie as much as Dale Cooper does, this one’s for you.”
— Tasting Table

“If you ever wished you could have a “damn fine cup of coffee” and slice of cherry pie from the Double R Diner, you’re in luck.”
— MarthaStewart.com

“Whether you’re a newcomer or someone who watched the original series, these more than 100 recipes inspired by characters and scenes from the show will feed your fandom.”
— RedEye