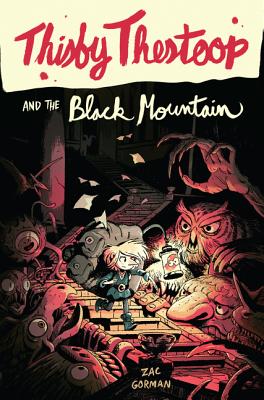 Thisby Thestoop and the Black Mountain

Surrounded by all creatures gruesome and grotesque, Thisby Thestoop, the gamekeeper for the Black Mountain Dungeon, is getting roped into another job—saving the princess’s skin—in the debut fantasy-adventure series by Zac Gorman, contributor to the hilarious Rick and Morty comic series.

In the absurd land of Nth, Thisby Thestoop can be found within the forlorn walls of Castle Grimstone, down the precarious steps of the Black Mountain dungeon, up to her nose in griffon toenails, gnoll spittle, and troll meat (to give to them, not made of them).

When the prince and princess arrive for a Royal Inspection, the much too good-looking Princess Iphigenia winds up lost in the tunnels of the dungeon—without her guards, her staff, or her younger twin brother—and it’s up to Thisby to guide the princess safely past the hoards of minotaurs, wyverns, ghouls, and who-knows-what-else that would love nothing more than to nosh the royal highness for dinner.

Thisby Thestoop and Princess Iphigenia have a dangerous adventure ahead of them. If they’re going to a rescue the missing prince, stop a mounting war, and keep safe all the creatures who call the mountain dungeon home, they’ll have to learn how to trust each other.


Praise For Thisby Thestoop and the Black Mountain…

“Tweens will instantly connect with innovative, hardworking Thisby and cheer her on. The story is an intriguing page-turner.” — School Library Journal

“The strength of this first novel of a planned series is certainly its menagerie of familiar and unfamiliar monsters, which Thisby helms as a young and extraordinary zookeeper.”
— Bulletin of the Center for Children’s Books