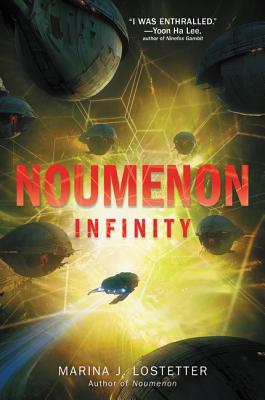 Travel to the remotest reaches of deep space in this wondrous follow-up to the acclaimed Noumenon—a tale of exploration, adventure, science, and humanity with the sweep and intelligence of the works of Arthur C. Clarke, Neal Stephenson, and Octavia Butler.

Generations ago, Convoy Seven and I.C.C. left Earth on a mission that would take them far beyond the solar system. Launched by the Planet United Consortium, a global group formed to pursue cooperative Earth-wide interests in deep space, nine ships headed into the unknown to explore a distant star called LQ Pyx.

Eons later, the convoy has returned to LQ Pyx to begin work on the Web, the alien megastructure that covers the star. Is it a Dyson Sphere, designed to power a civilization as everyone believes—or something far more sinister?

Meanwhile, Planet United’s littlest convoy, long thought to be lost, reemerges in a different sector of deep space. What they discover holds the answers to unlocking the Web’s greater purpose.

Each convoy possesses a piece of the Web’s puzzle . . . but they may not be able to bring those pieces together and uncover the structure’s true nature before it’s too late.

“A novel that was anything less than stellar would be an especially disappointing follow-up to the brilliant Noumenon, but Lostetter has achieved that and much more. [...] Sci-fi action and adventure held together by universally human themes; this is the genre at its very best.” — Kirkus Reviews (starred review)

“The ambitious and effective sequel to Noumenon […] Lostetter remains at the forefront of innovation in hard science fiction.” — Publishers Weekly (starred review)

“A tight, compelling sequel [...] Lostetter’s characters persevere and evolve, creating a compelling portrait that feels, at its heart, ultimately both human and galactic in scope.” — Strang Horizons

“Travel to the remotest reaches of deep space in this wondrous follow-up to the acclaimed Noumenon—a tale of exploration, adventure, science, and humanity with the sweep and intelligence of the works of Arthur C. Clarke, Neal Stephenson, and Octavia Butler.” — Open Book Society