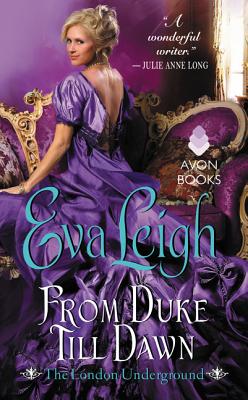 From Duke Till Dawn


Praise For From Duke Till Dawn: The London Underground…

“Leigh’s heroines are complex, vivid characters who seem to have stepped out of an enviable time and place, and not just because of all the satisfying, sexy romance they get to have.” — Sarah MacLean for the Washington Post

“Intelligent, romantic, and plays by its own rules [...] I highly recommend this story...” — All About Romance (Desert Isle Keeper)

“Strong characters—a truly “kissable” hero, a courageous heroine and a couple of witty friends—blend with the unique plotline to create a novel full of passion, adventure, sensuality and seductiveness that’s impossible to put down. Leigh is at the top of her game!” — RT Book Reviews (top pick)

“Ebullient, angsty, romantic, and wise, From Duke till Dawn is a terrific start to Eva Leigh’s new series.” — Heroes & Heartbreakers

“This eminently likeable hero and heroine are complicated and intriguing, as is the fascinating view into the underbelly of Regency England...  Readers will eagerly anticipate the next book in the series.” — BookPage

“Leigh’s new series opener casts an eerie glow on the denizens of London’s criminal class, letting one of its own become the answer to a duke’s stolid life of propriety. Strange bedfellows indeed, with heat in abundance. Readers will enjoy watching these two overcome enormous barriers to find happiness.” — Library Journal