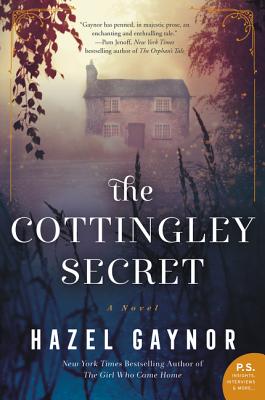 “The Cottingley Secret tells the tale of two girls who somehow convince the world that magic exists. An artful weaving of old legends with new realities, this tale invites the reader to wonder: could it be true?” — Kate Alcott, New York Times bestselling author of The Dressmaker

One of BookBub's Most-Anticipated Books of Summer 2017!


Praise For The Cottingley Secret: A Novel…

“Beautifully written and expertly researched, Gaynor’s latest is a look at one of history’s most intriguing mysteries and an important reminder of the power of belief.” — Booklist (starred review)

“There is real magic in these pages. And beauty. And heart.” — Nicole Mary Kelby, author of The Pink Suit

“The Cottingley Secret tells the tale of two girls who somehow convince the world that magic exists. An artful weaving of old legends with new realities, this tale invites the reader to wonder: could it be true?” —  Kate Alcott, New York Times bestselling author of The Dressmaker

“I adored The Cottingley Secret [...] Gaynor has penned in majestic prose an enchanting and enthralling tale of childhood magic, forgotten dreams, and finding the parts of ourselves we thought were lost forever.” — Pam Jenoff, New York Times bestselling author of The Orphan's Tale

“In The Cottingley Secret, Gaynor asks us the question we all have buried somewhere in our hearts-- is believing in ourselves, perhaps, the most important magic of all?” — Heather Webb, author of Rodin’s Lover

“Richly imagined and terrifically enchanting, Hazel Gaynor’s The Cottingley Secret is an enthralling tale where memories serve as lifelines for the living, and the unseen is made real. Reading this novel is akin to finding hidden treasure - each character, a friend; each chapter, a revelation.” — Ami McKay, author of The Witches of New York

“Gaynor (The Girl from the Savoy, 2016, etc.) creates a lovely meditation on the power of belief and hope.” — Kirkus Reviews

“Hazel Gaynor brings the mystery of the Cottingley Fairies thrillingly to life…A mystery, a love story, and an enchanting and surprising journey of self-discovery, The Cottingley Secret unwraps the true story behind one of the great hoaxes of the 19th century while still allowing the possibility of the magical.” — Kate Forsyth, author of Bitter Greens