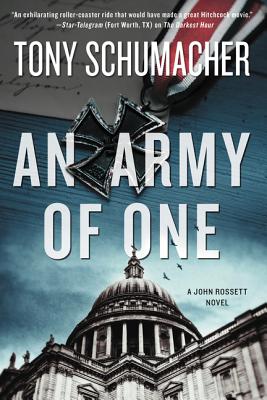 An Army of One (Hardcover)

In this enthralling historical thriller set in post—World War II London, detective John Henry Rossett must stop a murderous ex—SS officer as the German occupation of England begins to falter.

Working with the SS in German-occupied Britain was never easy for John Rossett. Though he’s returned to his former job, the police inspector has been tainted by his Nazi associations. His suspicious colleagues see him as a collaborator, and he’s unwelcome at his old haunts. But the Germans aren’t done with Rossett. When decorated SS Captain Karl Bauer kills the US consul in Liverpool, then goes on the run, Generalmajor Neumann orders Rossett to find the missing killer—a swift, cunning, and ruthless man known as "the Bear."

While the Nazis still maintain control over London, Liverpool is run by criminal networks and the British resistance. A wasteland of burned-out buildings and mountains of rubble, the northern port city is the perfect place for a clever warrior like Bauer to hide. Neumann and Rossett’s search also turns up damning new information: Bauer’s superior, Major Theo Dannecker, has been colluding with the US consul and the British resistance to smuggle large amounts of gold out of the country. As for the Bear, the fervent SS officer has repudiated his allegiance to the crumbling Reich and is now focused on destroying Rossett, the famed "British Lion," one innocent victim at a time.

To prevent more deaths and protect Britain, Rossett must trap the Bear and uncover a diabolical conspiracy that has brought Nazi officers and the British resistance together. Vivid and energetic, full of Schumacher’s trademark action and rich, conflicted characters, An Army of One reveals how the strength of one man can turn the tide in an uncertain world.


Praise For An Army of One: A John Rossett Novel…

“The author creates an action-packed plot while still exploring questions of morality.”
— Blackfive.net

Praise for The British Lion: “An extraordinary and exciting tour-de-force… [and] breathtakingly imagined.… Immaculate research and acute observation are allied to a dynamic cast of characters.… A riveting, remarkable novel which makes one hope there is more to come.”
— Lancashire Evening Post

“An exhilarating roller-coaster ride that would have made a great Hitchcock movie.”
— Fort Worth Star-Telegram

“A well-written adventure.”
— St. Louis Post-Dispatch on The Darkest Hour

“The Darkest Hour is an alternate history, a psychological study, and a thriller all rolled into one fantastic book. . . . A plat that is action-packed and gripping.”
— Crimespree Magazine on The Darkest Hour

“Within this foggy moral atmosphere . . . Schumacher creates a believable yet depressing occupied England, frozen and snow-covered. . . . Believable alternate history laced with multiple gunfights, turncoat duplicity, and an ending sure to propel the British Lion back into action.”
— Kirkus Reviews on The British Lion

Praise for The British Lion: “Schumacher has done his historical research about Nazis, their sympathizers, and the Holocaust. He mixes those facts into a riveting story, creating an alternate history that will have readers trembling with the realistic possibilities. This is a must-read.”
— Blackfive.net on The British Lion

Praise for Tony Schumacher: “Within this foggy moral atmosphere . . . Schumacher creates a believable yet depressing occupied England, frozen and snow-covered. . . . Believable alternate history laced with multiple gunfights, turncoat duplicity, and an ending sure to propel the British Lion back into action.”
— Kirkus Reviews on The British Lion
or
Not Currently Available for Direct Purchase
Copyright © 2020 American Booksellers Association