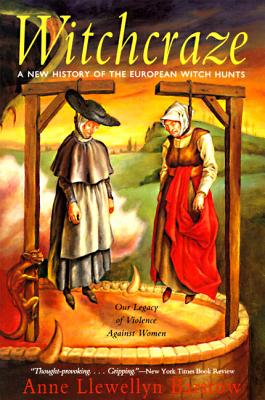 A New History of the European Witch Hunts

"In the sixteenth century, a rise in sexual violence in European society was exacerbated by pressure from church and state to change basic sexual customs...As the centuries since have shown escalating levels both of violence, general and sexual, and of state control, the witchcraze can be considered a portent, even a model, of some aspects of what modern Europe would be like."

Over three centuries, approximately one hundred thousand persons, most of whom were women, were put to death under the guise of "witch hunts", particularly in Reformation Europe. The shocking annihilation of women from all walks of life is explored in this brilliant, authoritative feminist history Anne Llwellyn Barstow. Barstow exposes an unrecognized holocaust -- the "ethnic cleansing" of independent women in Reformation Europe -- and examines the residual attitudes that continue to influence our culture.

Barstow argues that it is only with eyes sensitive to gender issues that we can discern what really happened in the persecution and murder of these women. Her sweeping chronicle examines the scapegoating of women from the ills of society, investigates how their subjugation to sexual violence and death sent a message of control to all women, and compares this persecution of women with the enslavement and slaughter of African slaves and Native Americans.

Ultimately Barstow traces the current backlash against women to its gynophobic torture-filled origins. In the process, she leaves an indelible mark on our growing understanding of the legacy of violence against women around the world.

Anne L. Barstow is professor of history, retired, at the State University of New York City at Old Westbury. She is the author of Joan of Arc: Heretic, Mystic, Shaman, and Married Priests and the Reforming Papacy, as well as many articles.
or support indie stores by buying on
Copyright © 2020 American Booksellers Association