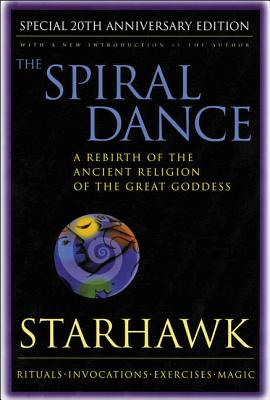 A Rebirth of the Ancient Religion of the Goddess: 20th Anniversary Edition

The twentieth anniversary edition of The Spiral Dance celebrates the pivotal role the book has had in bringing Goddess worship to the religious forefront. This bestselling classic is both an unparalleled reference on the practices and philosophies of Witchcraft and a guide to the life-affirming ways in which readers can turn to the Goddess to deepen their sense of personal pride, develop their inner power, and integrate mind, body, and spirit. Starhawk's brilliant, comprehensive overview of the growth, suppression, and modern-day re-emergence of Wicca as a Goddess-worshipping religion has left an indelible mark on the feminist spiritual consciousness.

In a new introduction, Starhawk reveals the ways in which Goddess religion and the practice of ritual have adapted and developed over the last twenty years, and she reflects on the ways in which these changes have influenced and enhanced her original ideas. In the face of an ever-changing world, this invaluable spiritual guidebook is more relevant than ever.

Starhawk is the author of nine books, including her bestselling The Spiral Dance, The Pagan Book of Living and Dying, and Webs of Power, winner of the 2003 Nautilus Award for social change. She has an international reputation, and her works have been translated into many different languages. Starhawk is also a columnist for beliefnet.com and ZNet. A veteran of progressive movements who is deeply committed to bringing the techniques and creative power of spirituality to political activism, she travels internationally, teaching magic, the tools of ritual, and the skills of activism. Starhawk lives part-time in San Francisco, in a collective house with her partner and friends, and part-time in a little hut in the woods in western Sonoma County, where she practices permaculture in her extensive gardens and writes.
Loading...
or support indie stores by buying on