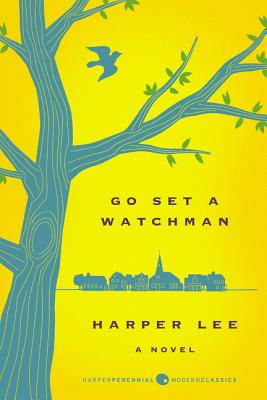 “Go Set a Watchman is such an important book, perhaps the most important novel on race to come out of the white South in decades…
— New York Times Opinion Pages: Taking Note

“Go Set a Watchman provides valuable insight into the generous, complex mind of one of America’s most important authors.”
— USA Today

“Don’t let ‘Go Set a Watchman’ change the way you think about Atticus Finch…the hard truth is that a man such as Atticus, born barely a decade after Reconstruction to a family of Southern gentry, would have had a complicated and tortuous history with race. That this doesn’t emerge in To Kill a Mockingbird, then, may be one of that book’s failings, a tendency to sugarcoat, to oversimplify. The Atticus in Go Set a Watchman, in other words, is likely closer to the way such a man would actually have been.”
— Los Angeles Times

“Harper Lee’s second novel sheds more light on our world than its predecessor did.”
— Time

“…the voice we came to know so well in To Kill a Mockingbird - funny, ornery, rulebreaking - is right here in Go Set a Watchman, too, as exasperating and captivating as ever.”
— Chicago Tribune

“A significant aspect of this novel is that it asks us to see Atticus now not merely as a hero, a god, but as a flesh-and-blood man with shortcomings and moral failing, enabling us to see ourselves for all our complexities and contradictions.”
— Washington Post

“The success of Go Set a Watchman... lies both in its depiction of Jean Louise reckoning with her father’s beliefs, and in the manner by which it integrates those beliefs into the Atticus we know.”
— Time

“Go Set a Watchman’s greatest asset may be its role in sparking frank discussion about America’s woeful track record when it comes to racial equality.”
— San Francisco Chronicle

“Go Set a Watchman comes to us at exactly the right moment. All important works of art do. They come when we don’t know how much we need them.”
— Chicago Tribune

“What makes Go Set a Watchman memorable is its sophisticated and even prescient view of the long march for racial justice. Remarkably, a novel written that long ago has a lot to say about our current struggles with race and inequality.”
— Chicago Tribune

“Go Set a Watchman’s gorgeous opening is better than we could have expected.”
— Vanity Fair

“Go Set a Watchman is more complex than Harper Lee’s original classic. A satisfying novel… it is, in most respects, a new work, and a pleasure, revelation and genuine literary event.”
— The Guardian

“Lee’s ability with description is evident… with long sentences beautifully rendered and evoking a world long lost to history, but welcoming all the same.”
— CNN.com

“A coming-of-age novel in which Scout becomes her own woman…Go Set a Watchman’s voice is beguiling and distinctive, and reminiscent of Mockingbird. (It) can’t be dismissed as literary scraps from Lee’s imagination. It has too much integrity for that.”
— The Independent

“Atticus’ complexity makes Go Set a Watchman worth reading. With Mockingbird, Harper Lee made us question what we know and who we think we are. Go Set a Watchman continues in this noble literary tradition.”
— New York Post

“A deftly written tale… there’s something undeniably comforting and familiar about sinking into Lee’s prose once again.”
— People

“One overarching theme that many critics have zeroed in on is that there is a lot to learn from the novel, as both a writer and a reader.”
— Vulture

“As Faulkner said, the only good stories are the ones about the human heart in conflict with itself. And that’s a pretty good summation of Go Set a Watchman.”
— Daily Beast

“Go Set a Watchman offers a rich and complex story… To make the novel about pinning the right label on Atticus is to miss the point.”
— Bloomberg View

“In this powerful newly published story about the Finch family, Lee presents a wider window into the white Southern heart, and tells us it is finally time for us all to shatter the false gods of the past and be free.”
— NPR's "Code Switch"

“[Go Set a Watchman is] filled with the evocative language, realistic dialogue and sense of place that partially explains what made Mockingbird so beloved.”
— Buffalo News