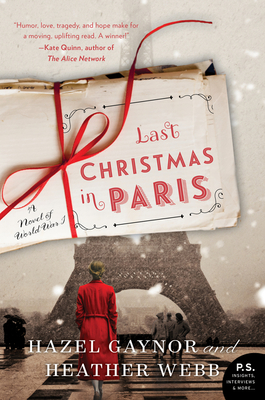 An unforgettably romantic novel that spans four Christmases (1914-1918), Last Christmas in Paris explores the ruins of war, the strength of love, and the enduring hope of the Christmas season.


Praise For Last Christmas in Paris: A Novel of World War I…

“Gaynor and Webb’s first collaboration is beautifully told [...] the authors fully capture the characters’ voices as each person is dramatically shaped by the war to end all wars.” — Booklist

“Last Christmas in Paris is an extraordinary epistolary novel that explores the history and aftermath of the Great War in a sensitive, memorable and profoundly moving fashion. A book to savor, to share and discuss with friends, and above all to cherish.” — Jennifer Robson, International bestselling author of Goodnight from London and Somewhere in France

“For fans of The Guernsey Literary and Potato Peel Society comes another terrific epistolary historical novel that is simply unputdownable [...] this remarkable novel will undoubtedly go on my keeper shelf.” — Karen White, New York Times bestselling author of The Night the Lights Went Out

“Humor, love, tragedy, and hope make for a moving, uplifting read. A winner!” — Kate Quinn, author of The Alice Network

1. Women’s roles changed dramatically through the course of WWI. What are your thoughts about Evie’s place in the war, at home and in France? Which factors came into play to cause these changes?

2. How did WWI affect societal structures and values? Are the effects still felt today?

3. Newspapers were the main source of information for the public in WWI. How do you feel about the War Office encouraging positive messages through propaganda while also suppressing the worst details of the war from the Front?

4. Thomas blamed himself for the decimation of his troops in 1916 at the battle of the Somme. Do you believe he—or any officer leading a battalion—is responsible for the loss of human life?

5. There was much controversy surrounding shell shock, or war neurosis, during this time. Soldiers were initially made to believe they were weak or ‘lacking moral fibre’. What are your thoughts about this, especially in terms of how we treat PTSD today?

6. Letters were of vital importance during WWI as they were the only means of communication between loved ones. What were your emotional reactions when reading these letters?

7. Do you still write letters? Would you like to see a return to traditional letter-writing?

8. Do you think Will’s mother was right to conceal the truth about his child from the rest of the family? What do you suppose were her motives?

9. Christmas is a time for family and reflection. What are your favorite family Christmas traditions?