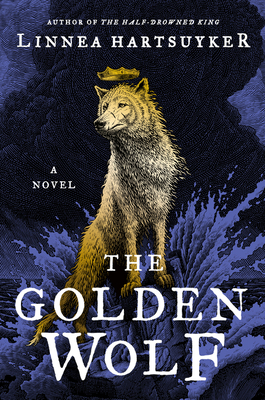 The fates of Ragnvald and his sister Svanhild unfold to their stunning conclusion in this riveting final volume in The Golden Wolf Saga, a trilogy that conjures the ancient world with the gripping detail, thrilling action, and vivid historical elements of "Game of Thrones" and "Outlander."

“Lovers of epic rejoice! Hartsuyker illuminates these old stories with authority and visceral detail, bringing to life the adventure, bleak beauty, and human struggle that lie at their heart.”—Madeline Miller, bestselling author of Circe and The Song of Achilles

Ragnvald has long held to his vision of King Harald as a golden wolf who will bring peace to Norway as its conqueror—even though he knows that Harald’s success will eventually mean his own doom. He is grateful to have his beloved sister, the fierce and independent Svanhild, once more at his side to help keep their kingdom secure. Free from the evil husband who used her, she is now one of Harald’s many wives.

While Svanhold is happy to be reunited with her beloved brother, and enjoys more freedom than ever before, she is restless and lonely. When an old enemy of Ragnvald’s kidnaps his niece, Freydis, his sister follows the daughter she has neglected to Iceland, where an old love awaits. This strange new land offers a life far different from what each has left behind, as well as unexpected challenges and choices.

Ragnvald, too, must contend with change. His sons—the gifted Einar, the princely Ivar, and the adventurous Rolli—are no longer children. Harald’s heirs have also grown up. Stepping back from his duties as king, he watches as his sons pursue their own ambitions. But Norway may no longer be large enough for so many would-be kings.

Now in their twilight years, these venerable men whose lives have been shaped by war must face another battle that awaits. A growing rebellion pits Ragnvald and his sons against enemies old and new, and a looming tragedy threatens to divide the hardened warrior from Harald and all who care for him. Across the sea, Svanhild, too, wrestles with a painful decision, risking the dissolution of her fragile new family as she desperately tries to save it.

Yet as old heroes fall, new heroes arise. For years, Ragnvald and Svanhild pursued the destinies bestowed by their ancient gods. Though the journey has cost them much, their sacrifices and dreams will be honored by the generations that follow, beginning with Freydis and Einar. Emerging from their parents’ long shadows, they have begun to carry on the family’s legacy while pursuing their own glorious fates.

This compelling conclusion to the Golden Wolf trilogy recreates Viking-age Scandinavia in all its danger, passion, power, and glory—a world of brutality and myth, loyalty and betrayal, where shifting alliances and vengeance can build kingdoms . . . and can tear them down.

“A satisfying finale to Hartsuyker’s Golden Wolf trilogy…Hartsuyker again displays skill at evoking the complexities of human relationships and the different facets of masculine and feminine strength…Her smart storytelling takes over as the threads come together in a fitting conclusion.”
— Booklist

&#8220A satisfying final volume in Hartsuyker’s Golden Wolf saga…This quality tale will appeal to fans of Viking fiction and should cross over to those who enjoy epic fantasy as well.”
— Publishers Weekly

“Hartsuyker tells an outstanding tale that is so much more than the Viking ships that roam through her books. The family bonds and oaths that tie everyone in this story together are the real threads here.”
— BookReporter.com

“An historical epic that transports readers to the ancient world of legendary Vikings with vivid storytelling. The multiple characters are fully developed and engaging, particularly the young teen mother Freydis, who courageously rises from tragic events to profoundly impact the lives of her family. Each of the characters’ stories seamlessly weave together to create a rich narrative culminating in a heartfelt and poignant ending. The masterfully written epic tale has elements of political intrigue, romance, sacrifice, betrayal, and adventure…The Golden Wolf is a compelling conclusion to the trilogy which captures the mystique and heart of Norse and Icelandic legends.”
— Historical Novel Society

“As a novelist, Hartsuyker is a natural…The complexity and depth with which she presents not only character and personality, but also interpersonal relationships, politics, intrigue, and family dynamics are breathtaking.  Honestly, to make readers care deeply about even The Golden Wolf’s villains and characters who deserve harsh outcomes is the mark of a good writer and a good storyteller. The Golden Wolf is the intimate, heartfelt end to a great trilogy.”
— Comic Book Bin

“The fates of Ragnvald and his sister Svanhild unfold to their stunning conclusion in this riveting final volume in The Golden Wolf Saga, a trilogy that conjures the ancient world with the gripping detail, thrilling action, and vivid historical elements of “Game of Thrones” and “Outlander.”
— Bookpeople.com

“Lovers of epic rejoice! Hartsuyker illuminates these old stories with authority and visceral detail, bringing to life the adventure, bleak beauty, and human struggle that lie at their heart.”
— Madeline Miller, author of Circe and Song of Achilles


“Linnea Hartsuyker brings myth and legend roaring to life in this superbly good page-turning saga of Viking-era Norway…Hers is an exciting, original voice in historical fiction.”
— Paula McLain, author of The Paris Wife and Circling the Sun

“This concluding volume in Linnea Hartsuyker’s fantastic Viking-era series brings to a multifaceted end the stories of Ragnvald and his sister Svanhild and likewise ends an absolutely first-rate trilogy.”
— Open Letters Review “Best Books of 2019”