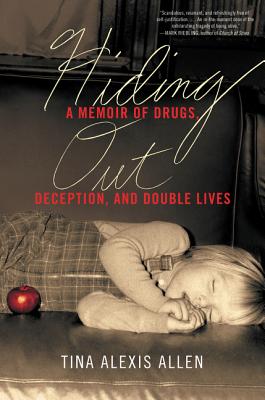 “I can fully recommend it, I read it cover to cover, the writing was excellent and was completely engrossed; the story is incredibly compelling.” — Megyn Kelly, Megyn Kelly TODAY

“[Hiding Out] brims with drunkenness, sexuality and urgency...She showcases excellent writing skills, packaging grit and grime into glistening prose. Her twisted mystery, family woes of the nastiest kind and multilayered love stories spin together to form a “can’t-put-down” read in Hiding Out.”
— Washington Post

“[Tina Alexis Allen] doesn’t hold back in her memoir Hiding Out.” — Teen Vogue

“Tina Alexis Allen was tired of living in the shadows...She is hoping [Hiding Out] will encourage others to come forward and speak out against being abused.” — FoxNews.com

“Scandalous, resonant, and refreshingly free of self-justification, Hiding Out is a compelling tale of sin and service, concealment and disclosure, hedonism and righteousness...an in-the-moment dose of the exhilarating tragedy of being alive.”  — Mark Riebling, author of Church of Spies

“Allen’s life — once dominated by cruelty and abuse — takes a deep dive into decadence, fueled by cocaine, champagne and Sir John’s never-ending supply of mysterious money. Hiding Out is about a lot of lies, and some are the ones we tell ourselves.” — New York Daily News

“Hiding Out is a whiplash read for its drama and intrigue, but it’s also an openhearted exploration of history, hypocrisy, and the fact that we may never know the answers to the questions that have shaped our lives.” — Shondaland.com

“This is not a book for the faint of heart. Tina scrubs her soul clean within its pages, uncovering and exposing the web of lies her young adulthood had become…[she] succeeds on all levels with this memoir you definitely will not forget.” — Talk Nerdy With Us

“A writer candidly confronts her personal truth in her quest for transformation, transcendence, and redemption.” — Kirkus Reviews

“Perhaps it’s Allen’s background as an actress and playwright that gives Hiding Out, at turns jaw-dropping and spellbinding, its dramatic tension and spot-on dialogue. Her memoir is as compulsive to read as it is heartbreaking. And that’s the truth.” — Washington Independent Review of Books