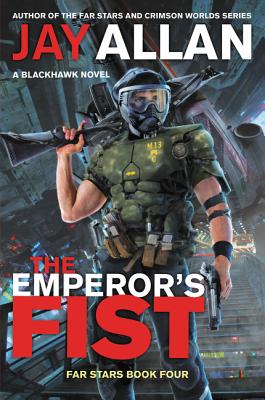 In this thrilling new installment in the Far Stars saga, a reluctant hero with a bloody past must reunite with an old love to battle an evil emperor willing to destroy all their worlds if he cannot control them.

When the Far Stars came under imperial attack, Astra Lucerne—the daughter and successor of the Far Stars’ greatest conqueror—Marshal Augustin Lucerne—rallied her father’s confederation forces to defend their worlds. They were joined in the fight by former imperial general Arkarin Blackhawk, a warrior whose skills and brutality made him infamous, and who has, for two decades, sought the redemption he knows is unreachable.

Now, with the imperial foothold in the sector eliminated, the Far Stars is free and almost united. While Astra’s forces continue to depose local tyrants and warlords, Ark and his crew have slipped back into the shadows. Though his heart belongs to Astra, Ark cannot get too close. His imperial conditioning remains under control, but it is still volatile, and the temptation of power threatens to unleash the dark compulsions that made him the most merciless of the emperor’s servants. He cannot risk allowing Astra to see the darkness inside him.

But while the battle has been won, the war may not be over. A petty smuggler makes a discovery that can enable the emperor to strike back and crush the resistance—unless Ark and Astra join forces again to stop him.

Jay Allan is a former investor and the author of the Crimson Worlds series and the first two books in the Far Stars series, Shadow of Empire and Enemy in the Dark. When not writing, he enjoys traveling, running, hiking, and reading. He loves hearing from readers and always answers e-mails. He currently lives in New York City.