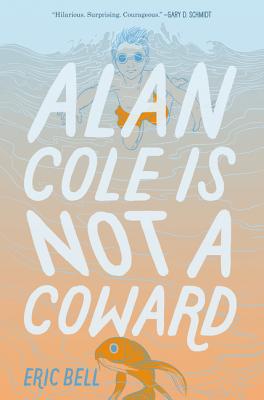 “Alan Cole starts out as a coward but doesn’t end as one in this harrowing but inspiring debut...The intensity of the family relationships is so effectively rendered that this book has the potential to appeal to older teens as well as a middle school audience.”
— Kirkus Reviews

“With its well-developed characters, juxtaposition of supportive adult educators and aggressive parents, and message of hope, this novel feels like a contemporary version of Gary D. Schmidt’s The Wednesday Wars and Okay for Now. A strong debut.”
— School Library Journal

“This book is the Labors of Hercules for the middle-school set, complete with underwear jokes. Bell has written a compelling story that examines homophobic fathers and families and still manages to show Alan a way to see himself as a valuable member of a community—as an artist, even a brave artist.”
— Horn Book Magazine

“There are books in this world that show us why it matters that we become our truest selves. This is one of them.”
— Gary D. Schmidt, Newbery Honor and Printz Honor author of Lizzie Bright and the Buckminster Boy and The Wednesday Wars

“No funny bone will go untickled, no heartstring untugged. Alan Cole and his band of misfits from the Unstable Table are coming for both, with a story that’s as important as it is entertaining, as thought-provoking as it is heartwarming, and as courageous as it is hilarious.”
— Brooks Benjamin, author of My Seventh-Grade Life in Tights

“An alluring setup and deft portrayal of middle school friendships are highlights of this impressive debut. Alan Cole is a complex character under pressure; we want to discover his fate!”
— Leslie Connor, author of Waiting for Normal, Crunch, and All Rise for the Honorable Perry T. Cook

Eric Bell lives and writes in Pennsylvania. He was once in middle school. He survived. You will too. Alan Cole Is Not a Coward is his debut novel, followed by Alan Cole Doesn't Dance. You can find him online at www.iamericbell.com.
or
Not Currently Available for Direct Purchase