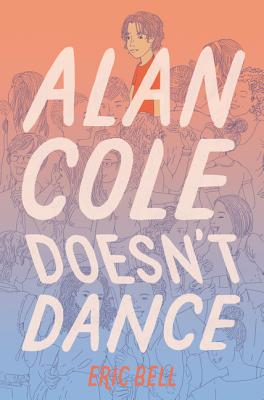 To heartwarming cheer, Alan Cole came out to his school. But now what?

In this follow-up novel to Alan Cole Is Not a Coward, Eric Bell deftly explores with nuance and humor how the first step to complete self-acceptance may mean actually putting your feet on the dance floor. This laugh-out-loud and poignant tale is perfect for fans of Gary Schmidt and Jerry Spinelli.

Alan Cole has a problem: Ron McCaughlin. Ever since Alan revealed he’s gay, Ron has been bullying Alan with relentless fury. Alan can’t tell his parents why he’s really coming home with bruises—because they still don’t know the truth about him.

Yet buoyed by the support of his classmates and with his friends Zack and Madison by his side, Alan thinks he can withstand the bullying and—just maybe—break through to Ron.

But all things come to a head when Alan’s father asks that he take June Harrison to the upcoming Winter Dance. Never mind that Alan has two left feet, does not like girls, and might be developing feelings for a new boy at school.

This resounding tale about friendship, family, and the many meanings of bravery will leave readers rooting for Alan and his gang of proud misfits once more.

“This accessible, funny novel is honest about challenges queer kids may face while still giving them a hopeful ending.” — Horn Book Guide

“Alan remains an appealing character, and his story is a welcome addition to LGBTQ literature for middle-schoolers.” — ALA Booklist

Praise for Alan Cole is Not a Coward: “Alan Cole starts out as a coward but doesn’t end as one in this harrowing but inspiring debut. The intensity of the family relationships is so effectively rendered that this book has the potential to appeal to older teens as well as a middle school audience.” — Kirkus Reviews

“This novel feels like a contemporary version of Gary D. Schmidt’s The Wednesday Wars and Okay for Now. A strong debut; recommend to tweens who enjoy realistic fiction, particularly readers looking for stories about LGBTQ kids.” — School Library Journal

“There are books in this world that show us why it matters that we become our truest selves. This is one of them.” — Gary D. Schmidt, Newbery Honor and Printz Honor author of Lizzie Bright and the Buckminster Boy and The Wednesday Wars

“No funny bone will go untickled, no heartstring untugged. Alan Cole and his band of misfits from the Unstable Table are coming for both, with a story that’s as important as it is entertaining, as thought-provoking as it is heartwarming, and as courageous as it is hilarious.” — Brooks Benjamin, author of My Seventh-Grade Life in Tights

“An alluring setup and deft portrayal of middle school friendships are highlights of this impressive debut. Alan Cole is a complex character under pressure; we want to discover his fate!” — Leslie Connor, author of Waiting for Normal, Crunch, and All Rise for the Honorable Perry T. Cook