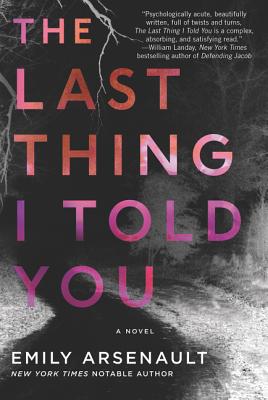 The Last Thing I Told You

From the acclaimed author of The Evening Spider and The Broken Teaglass comes this psychological thriller about the murder of a psychologist in a quiet New England town and his former patient whose unreliable thread will keep readers guessing until the shocking end.

Why did I ever come back here? Surely because of you. Because I thought of something I’d always meant to tell you. Because you were the only one I ever really wanted to tell it to…

Therapist Dr. Mark Fabian is dead—bludgeoned in his office.

But that doesn’t stop former patient Nadine Raines from talking to him—in her head. Why did she come back to her hometown after so many years away? Everyone here thinks she’s crazy. And she has to admit—they might have good reason to think so. She committed a shockingly violent act when she was sixteen, and has never really been able to explain that dark impulse—even to Fabian. Now that Fabian’s dead, why is she still trying?

Meanwhile, as Detective Henry Peacher investigates Fabian’s death, he discovers that shortly before he died, Fabian pulled the files of two former patients. One was of Nadine Raines, one of Henry’s former high school classmates. Henry still remembers the disturbing attack on a teacher that marked Nadine as a deeply troubled teen.

More shockingly, the other file was of Johnny Streeter, who is now serving a life sentence for a mass shooting five years ago. The shooting devastated the town and everyone—including Henry, who is uncomfortable with the “hero” status the tragedy afforded him—is ready to move on. But the appearance of his file brings up new questions. Maybe there is a decades-old connection between Nadine and Streeter. And maybe that somehow explains what Nadine is doing in Fabian’s office nearly twenty years after being his patient. Or how Fabian ended up dead two days after her return. Or why Nadine has fled town once again.

But as Nadine and Henry head toward a confrontation, both will discover that the secrets of people’s hearts are rarely simple, and—even in the hidden depths of a psychologist’s files—rarely as they appear.


Praise For The Last Thing I Told You: A Novel…

“The Last Thing I Told You swept me in with its haunting premise and captivating characters. Emily Arsenault weaves a thrilling, layered story that connects past and present, truth and memory. An original, unpredictable tale of psychological suspense.”
— Megan Miranda, New York Times bestselling author of The Perfect Stranger

“The Last Thing I Told You is an expertly woven tale of dark obsession and blood secrets. With her sharp eye and clear prose, Arsenault gives us a finely dissected portrait of a disturbed young woman as well as a tense thriller that defies categorization. Compulsively readable, and highly recommended.”
— Francie Lin, Edgar Award-winning author of The Foreigner

“Ensnared in an intricate web, Arsenault’s vivid characters seamlessly narrate a suspenseful tale in voices that resonate truth. But is that what they’re telling? If you like a twist-filled page-turner, you’ll love The Last Thing I Told You.”
— Wendy Corsi Staub, New York Times bestselling author

“A rich, finely-observed, character-driven psychological thriller that creeps up on you, surprising as it unfolds, inevitable in retrospect.”
— Hallie Ephron, New York Times bestselling author of You’ll Never Know, Dear

Emily Arsenault is also the author of The Evening Spider, The Broken Teaglass, In Search of the Rose Notes, Miss Me When I’m Gone, What Strange Creatures, and the young adult novel The Leaf Reader. She lives in Shelburne Falls, Massachusetts, with her husband and daughter.