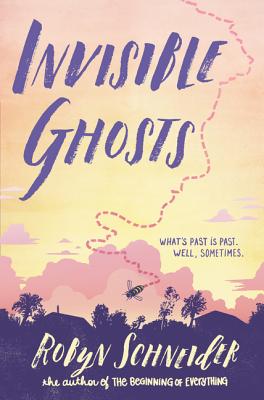 Robyn Schneider, author of Extraordinary Means and The Beginning of Everything, delivers a sharply funny, romantic girl-meets-boy novel with a twist: boy-also-meets-girl’s-ghost-brother.

When one girl’s best friend is her dead brother’s ghost, romance can be tricky. Perfect for fans of John Green and Nicola Yoon.

Rose Asher believes in ghosts. She should, since she has one for a best friend: Logan, her annoying, Netflix-addicted brother, who is forever stuck at fifteen. But Rose is growing up, and when an old friend moves back to Laguna Canyon and appears in her drama class, things get complicated.

Jamie Aldridge is charming, confident, and a painful reminder of the life Rose has been missing out on since her brother’s death. She watches as Jamie easily rejoins their former friends—a group of magnificently silly theater nerds—while avoiding her so intensely that it must be deliberate.

Yet when the two of them unexpectedly cross paths, Rose learns that Jamie has a secret of his own, one that changes everything. Rose finds herself drawn back into her old life—and to Jamie. But she quickly starts to suspect that he isn’t telling her the whole truth.

All Rose knows is that it’s becoming harder to choose between the boy who makes her feel alive and the brother she isn’t ready to lose.

“Schneider’s characters shine in this romance, strapped with quirky, nerdy obsessions that many teens will relate to, and supported by realistic voices. The integration of the ghost story is unique. Schneider authentically [captures] the sensation of not knowing where you belong, a feeling many teens know well.”
— Booklist

“In a story about letting go and courageously moving forward, Schneider makes the paranormal seem plausible. Readers will readily suspend their disbelief to see how Rose, a relatable heroine, deals with an apparition who grows increasingly bothersome while trying to pursue a meaningful relationship with the boy she loves.”
— Publishers Weekly

“Friends, parties, and romance all pull Rose away from the past; but at home, Logan’s ghost drags her right back. Schneider’s premise is an interesting twist on books featuring protagonists dealing with grief.”
— School Library Journal

Praise for EXTROADINARY MEANS: “Schneider’s subtlety, combined with themes about learning to live life fully, makes this an easy recommendation for those seeking titles similar in premise to John Green’s The Fault in Our Stars.”
— School Library Journal

“A must-read for fans of The Fault in Our Stars.”
— TeenReads