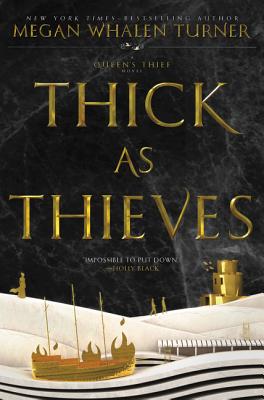 Thick as Thieves is the fifth novel set in the world of the Queen’s Thief. New York Times-bestselling author Megan Whalen Turner’s entrancing and award-winning Queen’s Thief novels bring to life the world of the epics and feature one of the most charismatic and incorrigible characters of fiction, Eugenides the thief. Megan Whalen Turner’s Queen’s Thief novels are rich with political machinations and intrigue, battles lost and won, dangerous journeys, divine intervention, power, passion, revenge, and deception. Perfect for fans of Leigh Bardugo, Marie Lu, Patrick Rothfuss, and George R. R. Martin.

Kamet, a secretary and slave to his Mede master, has the ambition and the means to become one of the most powerful people in the Empire. But with a whispered warning the future he envisioned is wrenched away, and he is forced onto a very different path. Set in the world of the Queen’s Thief, this epic adventure sees an ordinary hero take on an extraordinary mission. The Queen’s Thief novels have been praised by writers, critics, reviewers, and fans, and have been honored with glowing reviews, “best of” citations, and numerous awards, including the Los Angeles Times Book Prize, a Newbery Honor, the Andre Norton Award shortlist, and the Mythopoeic Fantasy Award. Thick as Thieves includes two maps, a map of the world of the Queen’s Thief, and a map of Kamet’s journey.

"Megan Whalen Turner has constructed a clever world filled with suspense and intrigue and characters that will never be forgotten. Once you dive into the world of the Queen's Thief, prepare to have your life stolen from you until you finish them all." —Joelle Charbonneau, New York Times-bestselling author of the Testing trilogy

“Megan Whalen Turner has constructed a clever world filled with suspense and intrigue and characters that will never be forgotten. Once you dive into the world of the Queen’s Thief [books], prepare to have your life stolen from you until you finish them all.” — Joelle Charbonneau, New York Times-bestselling author of the Testing trilogy

“Turner is a mature and amazing writer. I love this book: new characters mixed with Eugenides the Thief and world building like no other! My favorite of 2017.” — Judy Bulow, Tattered Cover Bookstore

“Even minor characters in Turner’s Queen’s Thief saga have fascinating stories to tell, as she proves in this fifth installment...Turner writes with complete authority about her richly imagined landscape. ...Turner fills out and enriches the expansive canvas on which she stitches her epic tale.” — Publishers Weekly (starred review)

“Turner is a criminally underrated writer, and this stand-alone novel from [the] “Queen’s Thief” [world] shows her again playing with narrative perspective, mixing history with fantasy to brilliant effect.” — Nickolas Butler, internationally bestselling author of Shotgun Lovesongs and The Hearts of Men

“The stakes are high and peace uneasy...Turner builds suspense not with battles and gore but through strategizing and charged, subtle dialogue. ...remains as fresh as the latest headline.” — Washington Post

“The complexity of Turner’s world combined with the suspense of her layered plot creates a story that will appeal to readers of all ages. The thrill of the chase is magnetic-as is Kamet’s budding and unlikely friendship with an Attolian...a spectacularly enchanted empire imagined by a master storyteller.” — Shelf Awareness

“Turner builds suspense not with battles and gore but through strategizing and charged, subtle dialogue. ...stylishly written . . . with its fractious leaders and fraught politics, remains as fresh as the latest headline.” — Newsday

Megan Whalen Turner is the New York Times–bestselling and award-winning author of five stand-alone novels set in the world of the Queen’s Thief. Return of the Thief marks her long-awaited conclusion to the epic and unforgettable story of the thief Eugenides—a story more than twenty years in the making. She has been awarded a Newbery Honor and a Boston Globe–Horn Book Honor and won the Los Angeles Times Book Prize for Young Adult Literature. She has twice been a finalist for the Andre Norton Award and won the Mythopoeic Fantasy Award for Children’s Literature.