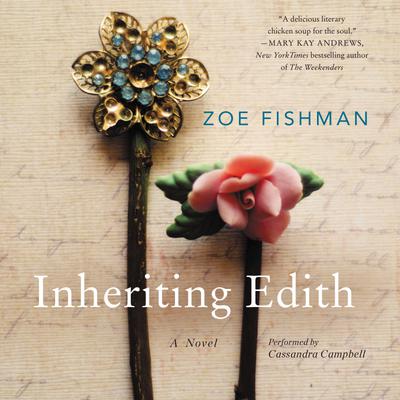 “It's a familiar cast of characters: a single mom raising a spunky kid; an older woman descending into Alzheimer's; the inhabitants of a small town; a nice eligible man. And then comes the twist: the single mom and the older woman aren't related by blood, but connected through the older woman's now deceased daughter. With humor and heart, long-held secrets come to light and special bonds are formed. Inheriting Edith is both entertaining and poignant.”
— Jenny Stroyeck (W), The Homer Bookstore, Homer, AK
View the List

From the author of Driving Lessons, Saving Ruth, and Balancing Acts comes a poignant breakout novel about a single mother who inherits a beautiful beach house with a caveat—she must take care of the ornery elderly woman who lives in it.

For years, Maggie Sheets has been an invisible hand in the glittering homes of wealthy New York City clients, scrubbing, dusting, mopping, and doing all she can to keep her head above water as a single mother. Everything changes when a former employer dies leaving Maggie a staggering inheritance. A house in Sag Harbor. The catch? It comes with an inhabitant: The deceased’s eighty-two-year old mother Edith.

Edith has Alzheimer’s—or so the doctors tell her—but she remembers exactly how her daughter Liza could light up a room, or bring dark clouds in her wake. And now Liza’s gone, by her own hand, and Edith has been left—like a chaise or strand of pearls—to a poorly dressed young woman with a toddler in tow.

Maggie and Edith are both certain this arrangement will be an utter disaster. But as summer days wane, a tenuous bond forms and Edith, who feels the urgency of her diagnosis, shares a secret that she’s held close for five decades, launching Maggie on a mission that might just lead them each to what they are looking for.

Zoe Fishman is the author of Driving Lessons, Saving Ruth, and Balancing Acts. Her books have been translated into German, Italian, Dutch and Polish. She’s the recipient of many awards, including Target’s Breakout and Emerging Author Picks, a New York Post Pick, and has been featured on NBC’s “Atlanta & Co.” as well as in Publishers Weekly and The Huffington Post. She is currently at work on her next novel, as well as teaching writing at The Callanwolde Fine Arts Center. Zoe lives in Atlanta with her husband and two sons.