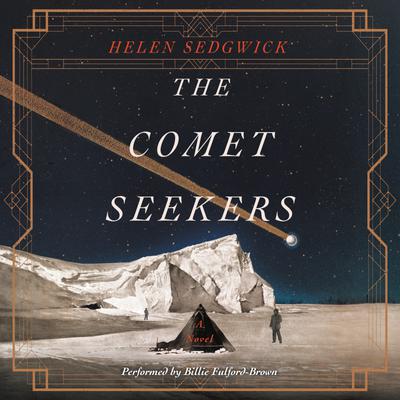 A magical, intoxicating debut novel, both intimate and epic, that intertwines the past, present, and future of two lovers bound by the passing of great comets overhead and a coterie of remarkable ancestors.

Róisín and François are immediately drawn to each other when they meet at a remote research base on the frozen ice sheets of Antarctica. At first glance, the pair could not be more different. Older by a few years, Róisín, a daughter of Ireland and a peripatetic astronomer, joins the science team to observe the fracturing of a comet overhead. François, the base’s chef, has just left his birthplace in Bayeux, France, for only the second time in his life. Yet devastating tragedy and the longing for a fresh start, which they share, as well as an indelible but unknown bond that stretches back centuries, connect them to each other.

Helen Sedgwick carefully unfolds their surprisingly intertwined paths, moving forward and back through time to reveal how these lovers’ destinies have long been tied to each other by the skies—the arrival of comets great and small. In telling Róisín and François’s story, Sedgwick illuminates the lives of their ancestors, showing how strangers can be connected and ghosts can be real, and how the way we choose to see the world can be as desolate or as beautiful as the comets themselves.

A mesmerizing, skillfully crafted, and emotionally perceptive novel that explores the choices we make, the connections we miss, and the ties that inextricably join our fates, The Comet Seekers reflects how the shifting cosmos unite us all through life, beyond death, and across the whole of time.

Helen Sedgwick is a writer, editor, and physicist, who grew up in London and now lives in the Scottish highlands. Helen was the managing director of Cargo Publishing from 2014 to 2015, and she founded Wildland Literary Editors in 2012. The same year she won a Scottish Book Trust New Writers Award and since then her writing has been published internationally and broadcast on BBC Radio 4. She was awarded a distinction from the MLitt in Creative Writing at Glasgow University in 2008. Before that, she worked as a research physicist, earning a PhD in Physics from Edinburgh University. She lives near the Dornoch Firth with her partner, photographer Michael Gallacher.