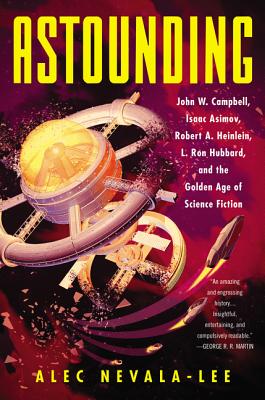 Astounding is the landmark account of the extraordinary partnership between four controversial writers—John W. Campbell, Isaac Asimov, Robert A. Heinlein, and L. Ron Hubbard—who set off a revolution in science fiction and forever changed our world.

This remarkable cultural narrative centers on the figure of John W. Campbell, Jr., whom Asimov called “the most powerful force in science fiction ever.” Campbell, who has never been the subject of a biography until now, was both a visionary author—he wrote the story that was later filmed as The Thing—and the editor of the groundbreaking magazine best known as Astounding Science Fiction, in which he discovered countless legendary writers and published classic works ranging from the I, Robot series to Dune. Over a period of more than thirty years, from the rise of the pulps to the debut of Star Trek, he dominated the genre, and his three closest collaborators reached unimaginable heights. Asimov became the most prolific author in American history; Heinlein emerged as the leading science fiction writer of his generation with the novels Starship Troopers and Stranger in a Strange Land; and Hubbard achieved lasting fame—and infamy—as the founder of the Church of Scientology.

Drawing on unexplored archives, thousands of unpublished letters, and dozens of interviews, Alec Nevala-Lee offers a riveting portrait of this circle of authors, their work, and their tumultuous private lives. With unprecedented scope, drama, and detail, Astounding describes how fan culture was born in the depths of the Great Depression; follows these four friends and rivals through World War II and the dawn of the atomic era; and honors such exceptional women as Doña Campbell and Leslyn Heinlein, whose pivotal roles in the history of the genre have gone largely unacknowledged. For the first time, it reveals the startling extent of Campbell’s influence on the ideas that evolved into Scientology, which prompted Asimov to observe: “I knew Campbell and I knew Hubbard, and no movement can have two Messiahs.” It looks unsparingly at the tragic final act that estranged the others from Campbell, bringing the golden age of science fiction to a close, and it illuminates how their complicated legacy continues to shape the imaginations of millions and our vision of the future itself.

“Alec Nevala-Lee has brilliantly recreated the era eighty years ago when a handful of dedicated writers and one extraordinary editor gave American science fiction its modern shape. It is a remarkable work of literary history.” — Robert Silverberg, Grand Master of the Science Fiction and Fantasy Writers of America

“Science fiction has been awaiting this history/biography for more than half a century....Here it is. This is the most important historical and critical work my field has ever seen. Alec Nevala-Lee’s superb scholarship and insight have made the seemingly impossible a radiant and irreplaceable gift.” — Barry N. Malzberg, author of Beyond Apollo

“Astounding has taught me things I didn’t know; put in context things I did know; and corrected things I thought I knew. This is a wonderful, well-written book; a delight to read.” — David Drake, author of Hammer’s Slammers

“Astounding is a sharp and detailed history of some of the major players in one of the most significant periods in modern science fiction. Highly recommended!” — Greg Bear, author of Blood Music

“A riveting read—a journey to another dimension, one that tells us a lot about creativity, human resilience, and even American exceptionalism. The book is a must read for lovers of science fiction, to be sure, but really for anyone interested in culture, and how it jumps, bounces, and changes.” — Cass R. Sunstein, New York Times bestselling author of The World According to Star Wars, and Robert Walmsley University Professor at Harvard Law School

“This is a fascinating, well-written, and deeply researched account of the golden age of science fiction. The lives of the writers are every bit as compelling as their best stories and Nevala-Lee brings them alive.” — Jon Atack, author of Let’s Sell These People a Piece of Blue Sky: Hubbard, Dianetics and Scientology

“A captivating cultural history… fascinating and complex… reads with the immediacy of a good novel… Nevala-Lee has managed to distill the essence of their stories into a compelling tale of ambition, idealism and opportunism that should fascinate even those who have never read much science fiction at all.” — Chicago Tribune

“A laser-sharp study of science fiction’s golden age, the product of a small circle of writers and their guiding editor...Nevala-Lee’s warts-and-all look is a welcome contribution to the study of popular literature.”   — Kirkus Reviews

“A thoroughgoing scholarly effort… A chatty, slightly gossipy popular biography. Nevala-Lee approaches the four subjects with a full understanding of their status and importance, but treats them as human beings with their own constellations of talents and flaws… You don’t want to miss this one.” — Analog Science Fiction and Fact

“Excellent… Ingenious… The story that Nevala-Lee pieces together here has never quite been assembled in such a detailed, balanced, and clearly written way… As literary and cultural history, Astounding may well stand as the definitive account of this important era in the growth of modern SF.”
— Locus

“[Astounding] is a rich, gripping cultural and historical study of how a small cadre of talents in a minor commercial genre became some of the most influential figures of the second half of the twentieth century.”  — Nature

“This wonderfully researched, expansive biography — humor, perspective, depth all much a part of it — is a document of things all but lost to time’s slurry, the portrait of a great editor in tandem with that of a genre’s maturation.” — Fantasy and Science Fiction

“Alec Nevala-Lee’s Astounding is an essential and long-overdue history of the golden age of science fiction, as reflected through the prism of some of its most significant contributors...it is an astounding history, and essential guide to a defining era of science fiction.” — B&N Sci-Fi & Fantasy Blog

“[Astounding] is an expansive industry drama...but the real treat of the book is [Nevala-Lee’s] dogged efforts to make these authors feel like the imperfect, egotistic, and philosophically-biased people who made such a lasting impact on the genre.” — SyFy.com

“[An] illuminating biography...Astounding is a captivating read” — John DeNardo, Kirkus

Alec Nevala-Lee was born in Castro Valley, California, and graduated from Harvard University with a bachelor’s degree in classics. He was a 2019 Hugo and Locus Award finalist for Astounding: John W. Campbell, Isaac Asimov, Robert A. Heinlein, L. Ron Hubbard, and the Golden Age of Science Fiction, which was named one of the best books of the year by The Economist, and is the author of three novels, including The Icon Thief. His nonfiction has appeared in the New York Times, the Los Angeles Times, Salon, The Daily Beast, Longreads, The Rumpus, Public Books, and the San Francisco Bay Guardian, and his short stories have been published in Analog Science Fiction and Fact, Lightspeed, and The Year’s Best Science Fiction. He lives with his wife and daughter in Oak Park, Illinois.