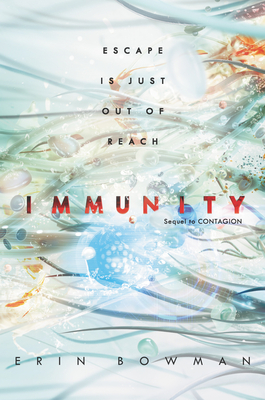 Thea, Coen, and Nova have escaped from Achlys, only to find themselves imprisoned on a ship they thought was their ticket to safety. Now the nightmare they thought they’d left behind is about to be unleashed as an act of political warfare, putting the entire galaxy at risk.

To prevent an interstellar catastrophe, they’ll have to harness the evil of the deadly Achlys contagion and deploy the only weapons they have left: themselves.

Fans of Jonathan Maberry, Rick Yancey, and Madeleine Roux will relish Bowman’s tense, high-stakes conclusion to the events of contagion.

Praise for Contagion: ★ “Bowman’s plot is intricate and action-packed, her worldbuilding is impressive yet economical, and the book climaxes in a gripping cliffhanger.”
— Publishers Weekly (starred review)

“A twisting, turning, edge-of-your-seat blend of science fiction, thriller, and horror. The pace, action, and tension are explosive from page one.”
— ALA Booklist

“Gripping, thrilling and terrifying in equal measures, Contagion is the perfect intersection of science fiction and horror -- I couldn’t look away.”
— Amie Kaufman, New York Times bestselling author of Illuminae and Unearthed

“Few understand the true horror that lies in the empty unknown of space, but Erin Bowman nails it in Contagion. Read this one with the lights on!”
— Beth Revis, New York Times bestselling author of the Across the Universe series and Star Wars: Rebel Rising

“Erin Bowman’s Contagion is everything I want in my science fiction: a cast of smart characters on a desperate rescue mission forced to confront an elusive and unstoppable enemy. I absolutely loved this layered and thrilling adventure and can’t wait to dive back into this world again.”
— Veronica Rossi, New York Times bestselling author of the Under the Never Sky series

Erin Bowman is the critically acclaimed author of numerous books for children and teens, including the Taken Trilogy, Vengeance Road, Retribution Rails, the Edgar Award-nominated Contagion duology, The Girl and the Witch’s Garden, and the forthcoming Dustborn. A web designer turned author, Erin has always been invested in telling stories–both visually and with words. Erin lives in New Hampshire with her husband and children. You can visit her online at www.embowman.com.