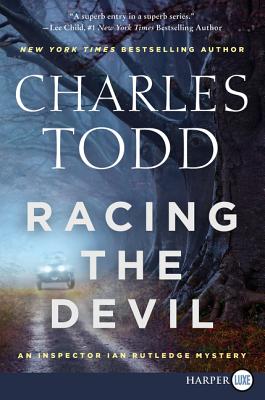 “A superb entry in a superb series: an exquisite sense of time and place, a satisfying mystery with a breathless conclusion, and above all the complex, haunted, charismatic Inspector Ian Rutledge himself-truly one of crime fiction’s most absorbing characters.”
— Lee Child, #1 New York Times bestselling author

Praise for No Shred of Evidence: “It’s that melancholy tone, the legacy of the trenches, that gives Todd’s polite rural mystery such uncommon depth.”
— Marilyn Stasio, New York Times Book Review on NO SHRED OF EVIDENCE

“Poirot was one name, Holmes was another, and Rutledge deserves to be in that classic pack of crime solvers.”
— Suspense Magazine on NO SHRED OF EVIDENCE

“Fans already mourning the end of “Downton Abbey” can easily get their English fix by following Rutledge and Hamish on their rounds.”
— Wilmington Star News on NO SHRED OF EVIDENCE

“The mother and son team, who write as Charles Todd, deftly capture the atmosphere of post World War I England in this complex mystery which will appeal to fans of British mysteries.”
— Iron Mountain Daily News on NO SHRED OF EVIDENCE

“Todd writes a rich mystery, but in investigating the murder Rutledge also probes the psychic wounds of the village and tries to minister to the collective survivor guilt of the living. ‘The dead,’ as the voice in his head tells him, ‘still believe it was worth dying for.’”
— Marilyn Stasio, New York Times Book Review on RACING THE DEVIL

“Charles Todd (actually a mother-son writing team) pulls off the voice-in-the-head device exquisitely. Moreover, the series is populated with highly nuanced characters, and the historical research is spot on. In “Racing the Devil,” the pacing is compelling.”
— Newark Star Ledger