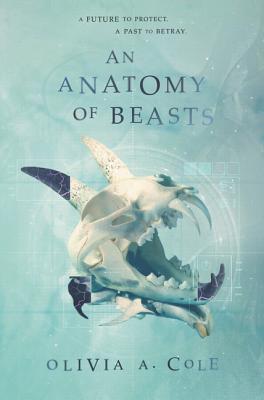 An Anatomy of Beasts

In the dazzling sequel to acclaimed author Oliva A. Cole’s YA sci-fi/fantasy debut, A Conspiracy of Stars, Octavia’s search to uncover the truth grows more dangerous as she becomes determined to protect her planet’s fate. This series is perfect for fans of Amie Kaufman, Veronica Roth, and Pierce Brown!

In the forty years since the Vagantur landed on Faloiv, the planet has existed in a tenuous peace between the humans who live in the enclosed community of N’Terra and the Faloii, the indigenous population. But after uncovering the shadowy secrets of the Council’s newly elected leader and helping a kidnapped Faloii man escape, sixteen-year-old Octavia knows that conflict is looming.

Then the Faloii discover the N’Terran’s latest experiment: an artificially weaponized creature, and Octavia realizes that it’s up to her to prevent her people from causing any further destruction.

As she and her friends set out to understand the scope of humanity’s history, nothing can prepare them for what they discover about both their home on Faloiv and the Origin planet. With war on the brink, Octavia must act to change her people’s future before the natural balance on the planet shifts forever.


Praise For An Anatomy of Beasts…

“An explosive sequel... The twists and turns will leave readers holding their breath and eagerly guessing what happens next, only to turn the page and realize nothing is as they imagined.... Cole’s duology comes to a stunning, deliciously nerve-wracking close.”
— ALA Booklist (starred review)

“Readers who hunger for immersive worldbuilding and for the moral ambiguity that is native to sci-fi as a genre will be well-sated here... Readers will eagerly barrel over the edge of this cliffhanger.”
— Kirkus Reviews

Praise for A Conspiracy of Stars:
“A Conspiracy of Stars takes you on a thrilling journey filled with cool science, amazing monsters, and vivid, lovable characters. It strikes that perfect balance of great storytelling and hard truthtelling. Jump in and enjoy the ride!”
— Daniel José Older, New York Times bestselling author of Shadowshaper

“Olivia A. Cole constructs a future world that is both fascinating and terrifying, hooking you immediately. Octavia’s mission unearths painful truths about the relationships between power, responsibility, and indigenous sovereignty. This book grabs your heart and will haunt you long after. A must-read!”
— Dhonielle Clayton, author of The Belles and the Tiny Pretty Things series

★ “This fantastical read is home to exceptional world building that is intricate and lush, and vivid, well drawn characters. Its sci-fi elements…plunge readers into a mysterious, futuristic world that they will be reluctant to leave. A stellar, captivating start.”
— Booklist (starred review)

“In a time when books are so often drawn into series, this installment leaves you begging for more. A great science fiction/fantasy addition to any library collection.”
— School Library Journal

“This fascinating work of science fiction explores the interactions between humans and aliens, with humans as the aggressors, prone to violence with a short-sighted ‘humans first’ mentality that does not bode well for their continued existence on their host planet. Impressive worldbuilding, well-developed characters, and nonstop action.”
— Voice of Youth Advocates (VOYA)

“Heart rates of readers will rise as Cole methodically weaves answers into the story, all the while throwing more questions into the mix.”
— Bulletin of the Center for Children’s Books

Olivia A. Cole is an author, a blogger, and a poet. Her books include A Conspiracy of Stars and Panther in the Hive and its sequel, The Rooster’s Garden. Olivia was born in Louisville, Kentucky, and wandered to Chicago and Miami before going back home. You can visit her online at www.oliviaacole.com.
Loading...
or support indie stores by buying on