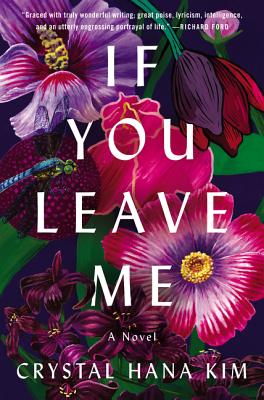 If You Leave Me

“An immersive, heartbreaking story about war, passion, and the road not taken.” — People

"One of the most beautiful and moving love stories you’ll read this year." — Nylon Magazine

An emotionally riveting debut novel about war, family, and forbidden love—the unforgettable saga of two ill-fated lovers in Korea and the heartbreaking choices they’re forced to make in the years surrounding the civil war that still haunts us today.

When the communist-backed army from the north invades her home, sixteen-year-old Haemi Lee, along with her widowed mother and ailing brother, is forced to flee to a refugee camp along the coast. For a few hours each night, she escapes her family’s makeshift home and tragic circumstances with her childhood friend, Kyunghwan.

Focused on finishing school, Kyunghwan doesn’t realize his older and wealthier cousin, Jisoo, has his sights set on the beautiful and spirited Haemi—and is determined to marry her before joining the fight. But as Haemi becomes a wife, then a mother, her decision to forsake the boy she always loved for the security of her family sets off a dramatic saga that will have profound effects for generations to come.

Richly told and deeply moving, If You Leave Me is a stunning portrait of war and refugee life, a passionate and timeless romance, and a heartrending exploration of one woman’s longing for autonomy in a rapidly changing world.


Praise For If You Leave Me: A Novel…

“Stunning … The novel is interested in something most others aren’t: the aftermath. It focuses both on what comes after war—as a new country struggles to develop its identity—and what follows Haemi’s fateful decision, as the ramifications of her choice ripple out to affect everyone around her.” — Washington Post

“Heartrending . . . details the anguish of star-crossed love and familial duty . . . a stunning feat of lyricism, an enthralling, tragic novel brimming with angst and remorse.”

“Both a forbidden love story and a portrait of war and refugee life, If You Leave Me will tear at your heartstrings. A breathtaking can’t-put-down read.” — MarieClaire.com

“A grand, sweeping story that proves that an epic can yield strong, individualized characters while still developing a nuanced perspective that refuses to essentialize war, women, or national identity.” — The Millions

“As beautifully layered as it is devastating . . . the riches of If You Leave Me will leave you contemplating the passage of time and its impact on the ties that we keep.” — Elle.com

“Mark our words: If You Leave Me is the book everyone (and their mothers in book club) will be talking about this summer . . . devastating and beautiful. With arresting prose, Kim writes of a woman caught in time and in history.” — Refinery29.com

“A remarkably absorbing novel of people enduring the unendurables of war with grace, toughness, and undying love. If You Leave Me marks the debut of a born storyteller.” — Chang-rae Lee, author of Native Speaker

“A gripping, heartrending tale of the birth of modern Korea filtered through the prism of an intimate love story.  In fresh, often astonishing prose, Kim brings her characters to life: complicated, flawed, and hard not to fall in love with. A strikingly original work.” — Jessica Shattuck, New York Times bestselling author of The Women in the Castle

“Combines vivid depictions of traditional Korean culture with an immersive, heartbreaking story about war, passion, and the road not taken.” — People

“Kim’s heartrending saga—told from the perspectives of five characters—examines how difficult choices can test even our closest relationships.” — Real Simple

“A family struggles to balance tradition and change in Kim’s marvelous debut. . . . [this] lyrical intergenerational saga resonates deeply and will appeal to readers who enjoyed The Orphan Master’s Son.” — Publishers Weekly (starred review)

“Crystal Hana Kim’s debut novel, If You Leave Me, is the saga of Haemi and Kyunghwan, childhood friends turned forbidden lovers, who are separated by civil war in Korea and brought together years later, when Haemi must choose between love and loyalty.” — Popsugar, 30 of the Newest, Hottest Books to Pick Up This Summer

“A love story and family saga melded into one, If You Leave Me is an unforgettable summer release about two young adults finding their way in the world.” — Parade, The Top 26 Hottest Books of Summer 2018

Crystal Hana Kim holds an MFA from Columbia University and is a contributing editor for Apogee Journal. She has received numerous awards, including PEN America’s Story Prize for Emerging Writers, along with fellowships and support from the Bread Loaf Writers’ Conference, and the Fine Arts Work Center in Provincetown, among others. Born and raised in New York, she currently lives in Chicago. If You Leave Me is her first novel.
Loading...
or
Not Currently Available for Direct Purchase