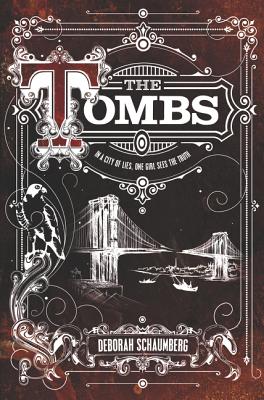 New York, 1882. A dark, forbidding city, and no place for a girl with unexplainable powers.

Deborah Schaumberg’s gripping debut takes readers on a breathless trip across a teeming turn-of-the-century New York and asks the question: Where can you hide in a city that wants you buried?

Sixteen-year-old Avery Kohl pines for the life she had before her mother was taken. She fears the mysterious men in crow masks who locked her mother in the Tombs asylum for being able to see what others couldn’t.

Avery denies the signs in herself, focusing instead on her shifts at the ironworks factory and keeping her inventor father out of trouble. Other than listening to secondhand tales of adventure from her best friend, Khan, an ex-slave, and caring for her falcon, Seraphine, Avery spends her days struggling to survive.

Like her mother’s, Avery’s powers refuse to be contained. When she causes a bizarre explosion at the factory, she has no choice but to run from her lies, straight into the darkest corners of the city.

Avery must embrace her abilities and learn to wield their power—or join her mother in the cavernous horrors of the Tombs. And the Tombs has secrets of its own: strange experiments are being performed on “patients”...and no one knows why.

Deborah Schaumberg was born in Brooklyn, not far from where her novel The Tombs takes place. She grew up renovating dilapidated old houses with her family. She and her father would walk the rooms, floor by floor, making up stories about the inhabitants that were filled with dark secrets, monsters, and, of course, ghosts. Deborah is a writer and an artist whose work always has an element of fantasy to it, and since she also studied architecture, settings are equally important. It was on a trek to the Annapurna Sanctuary in Nepal that she imagined a girl with the ability to see energy, and the seed of The Tombs was planted. She collects old bottles, and her favorite holiday is, you guessed it, Halloween. Deborah lives with her family and two dogs in Maryland, just outside DC. Visit her on the web at www.deborahschaumberg.com.
Loading...
or
Not Currently Available for Direct Purchase