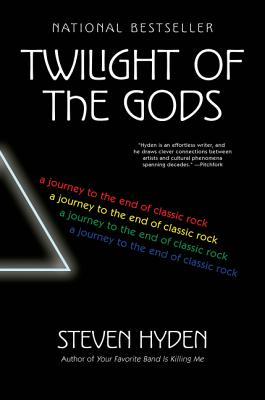 Twilight of the Gods

A Journey to the End of Classic Rock

The author of the critically acclaimed Your Favorite Band is Killing Me offers an eye-opening exploration of the state of classic rock, its past and future, the impact it has had, and what its loss would mean to an industry, a culture, and a way of life.

Since the late 1960s, a legendary cadre of artists—including the Rolling Stones, Bob Dylan, Neil Young, Bruce Springsteen, Fleetwood Mac, the Eagles, Black Sabbath, and the Who—has revolutionized popular culture and the sounds of our lives. While their songs still get airtime and some of these bands continue to tour, its idols are leaving the stage permanently. Can classic rock remain relevant as these legends die off, or will this major musical subculture fade away as many have before, Steven Hyden asks.

In this mix of personal memoir, criticism, and journalism, Hyden stands witness as classic rock reaches the precipice. Traveling to the eclectic places where geriatric rockers are still making music, he talks to the artists and fans who have aged with them, explores the ways that classic rock has changed the culture, investigates the rise and fall of classic rock radio, and turns to live bootlegs, tell-all rock biographies, and even the liner notes of rock’s greatest masterpieces to tell the story of what this music meant, and how it will be remembered, for fans like himself.

Twilight of the Gods is also Hyden’s story. Celebrating his love of this incredible music that has taken him from adolescence to fatherhood, he ponders two essential questions: Is it time to give up on his childhood heroes, or can this music teach him about growing old with his hopes and dreams intact? And what can we all learn from rock gods and their music—are they ephemeral or eternal?


Praise For Twilight of the Gods: A Journey to the End of Classic Rock…

“Overlaid with sometimes funny, sometimes heartbreaking personal moments that elevate the book beyond mere compendium, Hyden has the power to make you look at power ballads, Styx, and even R.E.O Speedwagon’s ‘Take It on the Run’ in a new light.”
— Pitchfork

“A wise meditation on why classic rock stars keep trucking, both on the road and in our dreams. Every page is an irresistible argument starter.”
— Rob Sheffield, author of Dreaming the Beatles and Love is a Mix Tape

“In this poignant tribute to the experience of being rescued by rock and roll, Hyden manages to both celebrate and mourn the inherently ephemeral magic of his heroes: the original class of rock and roll stars. His impassioned but wry prose does his saviors justice.”
— Lizzy Goodman, author of Meet Me in the Bathroom

“Hyden offers another perfectly pitched study of music culture in Twilight of the Gods. A delightful, often comic, ramble into the world of classic rock, and a thought-provoking study that shows how the genre’s mythologies have shaped our collective consciousness.”
— Bob Mehr, author of Trouble Boys: The True Story of the Replacements

“With Twilight of the Gods, where he sets his laser beam focus onto the Stones, Springsteen, Black Sabbath and more, Steven Hyden is better than he’s ever been. It’s crisp, purposeful work, and I’m so very excited to steal all of his ideas and present them as my own.”
— Shea Serrano, author of Basketball (And Other Things) and The Rap Year Book

“One of my favorite rock critics.”
— Seth Meyers

“If you love rock and roll, this book will offer delights and insights on every page; if you depend on rock and roll to make your living, this book will chill the soul beyond the bleakest works of King or Lovecraft.”
— Patrick Stickles, lead singer, frontman, and songwriter of Titus Andronicus

“Hyden’s critiques are consistently on target...he has created a hilariously opinionated personal history of classic rock that should resonate with his fellow genre enthusiasts.”
— Publishers Weekly

“Warm and witty scholarship...a fleet-footed quest to understand the fascination — his and ours — with the boomer heroes who still hold an outsized place in the culture even as they’re once again dying like it’s 1969.”
— Chris Klimek, The Washington Post

“[An] engaging (even loving) deflation of boomer rock heroes and traditions.”
— Newsweek

“Hyden simultaneously lampoons and lionizes the assumptions and pretensions behind the great rock canon. In an age when poptimism has overtaken the old rockist view of music, Hyden balances those two views with great insight and piercing wit.”
— Billboard

“If you’re someone who loves debating whether AC/DC is still AC/DC when Axl Rose is singing, or whether Tom Petty and Bruce Springsteen briefly switched places as the top dog of ‘heartland rock’ in the ’90s, Twilight of the Gods will be a feast.”
— The Atlantic

“Part memoir, part criticism, and part pondering both funny and fraught, Hyden’s insightful writing about the genre and its giants makes for compelling and freewheeling page-turning.”
— Houston Press

Steven Hyden is the author of Your Favorite Band Is Killing Me. His writing has appeared in the New York Times Magazine, Washington Post, Billboard, Pitchfork, Rolling Stone, Grantland, The A.V. Club, Slate and Salon. He is currently the cultural critic at UPROXX, and the host of the Celebration Rock podcast. He lives in Minnesota with his wife and two children.