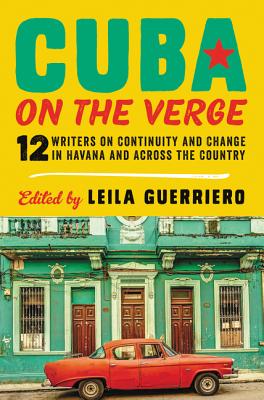 Cuba on the Verge

Spanning politics and art, music and baseball, Cuba on the Verge is a timely look at a society’s profound transformation—from inside and out

Just ninety miles from United States shores yet inaccessible to most Americans until recently, Cuba fascinates as much as it confounds. Images of the Buena Vista Social Club, wild nights at the Tropicana, classic cars, and bearded rebels clinching cigars only scrape the surface of Cuba’s complex history and legacy. As the US and Cuba move toward the normalization of diplomatic relations after an epic fifty-six-year standoff, we find ourselves face-to-face with one of the few places in the world that has been off limits to most Americans. We know that Cuba is changing, but from what and into what? And what does this change mean for the Cuban people as well as for the rest of the world?

Standing on both sides of the divide, twelve of our most celebrated writers investigate this period of momentous transition in Cuba on the Verge. These essays span the spectrum, from Carlos Manuel Álvarez’s story of being among the last generation of Cubans to be raised under Fidel Castro to Patricia Engel’s look at how Cuba’s capital has changed through her years of riding across it with her taxi driver friend; from The New Yorker’s Jon Lee Anderson (who traveled with President Obama on the first trip to Cuba by an American president since the twenties) on being a foreigner in Cuba during the Special Period to Francisco Goldman on the Tropicana, then and now, to Leonardo Padura on the religion that is Cuban baseball.

Cuba on the Verge is the definitive account of—and a unique glimpse at—a moment of upheaval and reinvention whose effects promise to reverberate across years and nations.


Praise For Cuba on the Verge: 12 Writers on Continuity and Change in Havana and Across the Country…

“[An] anthology of stupendously astute essays...Guerriero’s meticulously curated dozen essays offers an irresistibly beckoning window onto a nation just 90 miles from American shores, though far away in practice and culture.” — Booklist (starred review)

“...This anthology captures much of the broad, surreal spectrum of experience possible on the world’s most complex and controversial island.” — Alex Mar, author of Witches of America

“These essays speak to and against one another, they cannot be politically aligned, and that is all as it should be - but what unites them is brilliant writing, a depth of intelligence, and a desire to pull us down from fantastic abstractions to the level of the human.” — Justin Torres, author of We the Animals

“[A] fascinating anthology . . . Not quite a travelogue, this appealing volume will nevertheless satisfy any Americans wanting to be transported into the lives and experiences of real Cubans.” — Publishers Weekly

“This fascinating collection of essays explores Cuba’s modern transformation, tackling topics from politics to music to baseball. You’ll find yourself both informed and entertained.” — Paste Magazine

Leila Guerriero is an Argentine journalist and editor whose work has appeared in magazines and journals all over the world, including Argentina's La Nacion and Rolling Stone and Spain's El Pais and Vanity Fair. She is the Latin American editor for Gatopardo and has published a number of books, including Los suicidios del fin del mundo (The Suicides at the End of the World) and A Simple Story: The Last Malambo. Other contributors: Wendy Guerra; Leonardo Padura; Francisco Goldman; Jon Lee Anderson; Mauricio Vincent; Abraham Jimenez Enoa; Patricia Engel; Patricio Fernandez; Carlos Manuel Alvarez; Ivan de la Nuez; Vladimir Cruz; Ruben Gallo.
Loading...
or
Not Currently Available for Direct Purchase