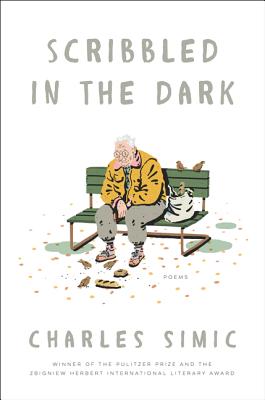 Scribbled in the Dark

From the Pulitzer Prize—winning former poet laureate, a collection of elegiac, irreverent, lyrical new poems—an American master at the height of his talent, shining light out into the dark

The latest volume of poetry from Charles Simic hums with the liveliness of the writer’s pen—Scribbled in the Dark brings the poet’s signature sardonic sense of humor, piercing social insight, and haunting lyricism to diverse and richly imagined landscapes.

Peopled by policemen, presidents, kids in Halloween masks, a fortune-teller, a fly on the wall of the poet’s kitchen; on crowded New York streets, on park benches, and under darkened skies: the pages within toy with the end of the world and its infinity. Charles Simic continues to be an imitable voice in modern American poetry, one of its finest chroniclers of the human condition.


Praise For Scribbled in the Dark: Poems…

“Simic...has always challenged and delighted his audience with writing that is beautiful and surreal and forces people to consider the validity of their own perceptions.” — Washington Post