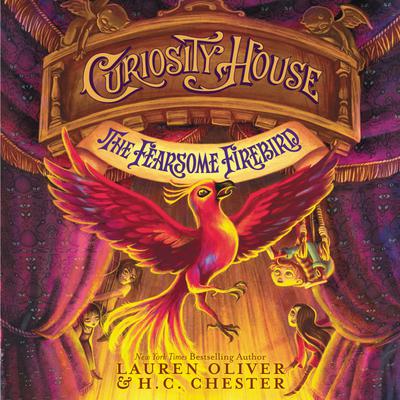 In this third book in the exceptional Curiosity House mystery series by bestselling author Lauren Oliver and mysterious recluse H. C. Chester, four children must uncover the evil Nicholas Rattigan’s newest dastardly scheme, wage war with a rival freak show, and deal with a spy who may have infiltrated their happy home.

Sam, Philippa, Thomas, and Max have just started to recover from their capture and subsequent escape from Rattigan. But the children’s lives don’t stay quiet for long.

A slew of bank robberies is terrorizing the city. And when Professor Farnum, the ringmaster of the museum’s now immensely popular flea circus, is charged with murder, the search for the real killer uncovers a plot much bigger than any individual crime—a plot that can only be the work of Nicholas Rattigan.

This is the third book in the series and contains even more exciting marvels, such as:

Lauren Oliver is the New York Times bestselling author of the YA novels Replica, Vanishing Girls, Panic, and the Delirium trilogy: Delirium, Pandemonium, and Requiem, which have been translated into more than thirty languages. The film rights to both Replica and Lauren's bestselling first novel, Before I Fall, were acquired by AwesomenessTV; a major motion picture adaptation of Before I Fall was announced by Open Road Films in 2016.

Lauren is also the author of novels for middle grade readers: The Spindlers; Liesl & Po, which was an E. B. White Read Aloud Award nominee; and the Curiosity House series, co-written with H. C. Chester. She has also written one novel for adults, Rooms.

A graduate of the University of Chicago and NYU's MFA program, Lauren Oliver is also the cofounder of content development company Paper Lantern Lit. You can visit her online at www.laurenoliverbooks.com.