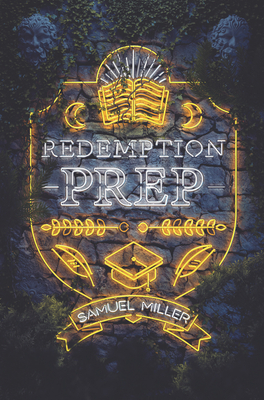 A New York Times bestseller! Twin Peaks meets Riverdale in this twisty atmospheric mystery from the critically acclaimed author of A Lite Too Bright, Samuel Miller, about the search for a missing girl at an elite prep school.

Everyone knows Emma. Neesha’s her best friend, Aiden’s her basketball star boyfriend, and Evan’s her shadow, following Emma’s every move.

Emma stands out, which is hard to do at Redemption Prep, a school where every student has been handpicked to attend its remote campus in the forest of Utah. So when she goes missing in plain sight during mass, everyone notices.

And everyone becomes a suspect, especially at a school with so many rules: Don’t skip mass. Don’t break curfew. Don’t go into the woods.

Emma’s disappearance ignites an investigation, and Neesha, Aiden, and Evan all want to find her—for different reasons. But they each have their own secrets to hide, and not everyone wants Emma to be found.

As the search continues, the students start to realize that they’re not the only ones trying to hide something. Redemption Prep has secrets, too—secrets bigger than any of the students could have imagined, and Emma could be the key to finding out the truth . . . if anyone can find her.

"The moody atmosphere, the science/religion dichotomy, and the constant cliff-hangers will keep readers hooked till the shocking finale." — Booklist

"Readers looking for a unique take on the isolated-house mystery, with a bizarre setting and a cast of unstable characters, will enjoy losing themselves in this strange yet compelling tale of drugs, power, and the future of the human race." — Bulletin of the Center for Children’s Books

“A tense and atmospheric thriller with a truly surprising twist. I can’t wait to see what Samuel Miller does next!” — Kara Thomas, award-winning author of The Cheerleaders

“Clever, drama-filled, and mind-blowing. My mind is still reeling from the twists and turns, and I loved every second of it.” — Sasha Alsberg, #1 New York Times bestselling author

“Eerie, atmospheric, and smart as a whip, Redemption Prep kept me on the edge of my seat until the last page.” — Brittany Cavallaro, New York Times bestselling author of the Charlotte Holmes series

Praise for A LITE TOO BRIGHT: “What a compelling journey this is—and what an accomplished debut too. Beautifully conceived and executed, it has an irresistible premise; an ingenious plot tinged with mystery; compelling, multidimensional characters; and a haunting ethos that will linger in readers’ minds long after they have finished.” — ALA Booklist (starred review)

“Jumping from clue to clue and train to train across the country, Arthur stumbles upon extraordinary discoveries, from long-lost family members to secret societies. This fresh incarnation of the great American road trip novel is bursting with big ideas, enigmas, poetry, and flashes of humor.” — Kirkus Reviews (starred review)

“Charmingly written, this debut novel introduces rounded characters and an engaging mystery. Wonderfully mirroring the disjointed feelings and thoughts of young Arthur and those who have dementia, this literary piece has a satisfying conclusion. A highly recommended purchase for fans of literary and realistic fiction centered around family.” — School Library Journal (starred review)

“Debut author Miller peppers his well-paced chapters with the poetry of ALP the First. This earnest homage to writers, rebels, and the evergreen ideals of youth will appeal to devotees of John Green and Gayle Forman.” — The Horn Book

Samuel Miller was born and raised in Vermillion, South Dakota, and now resides in Los Angeles, where, in addition to writing, he directs music videos and coaches Little League Baseball. He began writing his first novel while on tour in a fifteen-passenger van with the rock band Paradise Fears. A Lite Too Bright is his debut novel. Currently he attends graduate school at the University of Southern California. He credits his existence entirely to two spectacular parents, three brothers, one sister, and the best and sweetest puppy dog on the whole planet, Addison.
Loading...
or support indie stores by buying on