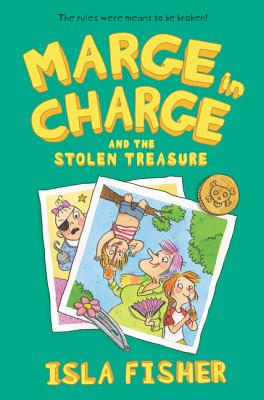 Marge in Charge and the Stolen Treasure

Marge the babysitter might look like a very tiny elfin grandmother at first, but in these three hilarious stories, she’s letting down her rainbow hair and getting in a brand-new heap of trouble.

Siblings Jemima and Jake Button are used to things being very sensible: their babysitters always follow the lists of rules from Mommy and Dad. But sometimes sensible isn’t very fun—and with Marge around, you’ve got to stay on your toes! Before you can say Kalamazoo!, there’s a pirate baby on the loose, lost treasure at the neighborhood pool, and chaos at a very important wedding.

When Marge is in charge, you truly never know what will happen next!


Praise For Marge in Charge and the Stolen Treasure…

“The slapstick humor is right on target for the intended audience and...Jemima’s first-person narration puts readers right into the action as Marge creates magic, fun, and resourcefulness wherever she goes.”
— School Library Journal

Praise for MARGE IN CHARGE: “The short, funny adventures will appeal to new readers. This also works well as a read-aloud and is a great segue into the classic tales of another mischievous nanny, Mary Poppins.”
— School Library Journal

Isla Fisher has worked in TV and film for twenty-five years, including roles in The Great Gatsby, I Heart Huckabees, Wedding Crashers, Rise of the Guardians, Scooby Doo, Definitely Maybe, and Confessions of a Shopaholic. She has also co-starred in Arrested Development and lent her voice to the Oscar-winning animated film Rango. Most recently, she can be seen starring in Keeping Up with the Joneses and Nocturnal Animals. She has won an MTV Movie Award, an Elle Women in Hollywood Icon Award, and an AACTA Trailblazer Award, and she was recognized by the Alliance of Women Film Journalists and has received nominations ranging from the Teen Choice Awards to the Screen Actors Guild Awards. She has played many fun and different characters, but her favorite role is being a mom to her three children with her husband, fellow comedian Sacha Baron Cohen. Isla has been making up stories at bedtime for them every night since they were born, which is how Marge in Charge began.