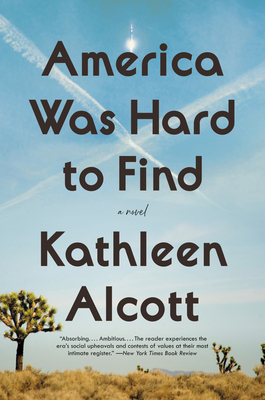 America Was Hard to Find (Paperback)

In the wake of an affair, the lives of an astronaut and a radical are forever altered by the political fault lines of the 1960s, setting off a series of events ricocheting from anti-Vietnam activism to the Apollo program to the AIDS crisis, in this sprawling multigenerational novel

Years earlier, Fay and Vincent meet at a pilots’ bar in the Mojave Desert. Both seemed poised for reinvention—the married test pilot, Vincent, as an astronaut; the spurned child of privilege, Fay, as an activist. Their casual affair ends quickly, but its consequences linger.

Though their lives split, their senses of purpose deepen in tandem, each becoming heroes to different sides of the political spectrum of the 1960s and 70s: Vincent an icon with no plan beyond the mission for which he has single-mindedly trained, Fay a leader of a violent leftist group whose anti-Vietnam actions make her one of the FBI’s most wanted. With her last public appearance, a demonstration that frames the Apollo program as a vehicle for distracting the American public from its country’s atrocities, Fay leaves Wright to contend with her legacy, his own growing apathy, and the misdeeds of both his mother and his country.

An immense, vivid reimagining of the Cold War era, America Was Hard to Find traces the fallout of the cultural revolution that divided the country and explores the meaning of individual lives in times of upheaval. It also confirms Kathleen Alcott’s reputation as a fearless and vital voice in fiction.

Born in 1988 in Northern California, Kathleen Alcott is the author of the novels Infinite Home and The Dangers of Proximal Alphabets. Her short stories and nonfiction have appeared in Zoetrope: All Story, ZYZZYVA, The Guardian, Tin House, The New York Times Magazine, the Bennington Review, and elsewhere. In 2017, she was shortlisted for the Sunday Times EFG Short Story Award; her short fiction has been translated into Korean and Dutch. She divides her time between New York City, where she teaches fiction at Columbia University, and Vermont, where she serves as a 2018-2019 visiting professor at Bennington College.


Praise For America Was Hard to Find: A Novel…

“Sprawling but absorbing.... Ambitious.... Shimmering, knife-sharp descriptions of small and often devastating moments of individual experience within those larger histories.... The reader experiences the era’s social upheavals and contests of values at their most intimate register.”
— New York Times Book Review

“Sixties radicalism and the space program are set in fruitful juxtaposition in this ambitious novel.... Displays a sure-handed lyricism... Its energy lies in its skepticism about the American century and the parallels the author finds between contradictory currents.”
— The New Yorker

“Ms. Alcott is an impressionistic stylist capable of lovely, luminous effects on the brushstroke level of the sentence.... Such writing seems well suited to fantasy, and because nothing is more like a fairy tale than space travel, it makes sense that Ms. Alcott is at her best in zero gravity.”
— Wall Street Journal

“Ms. Alcott’s tale of the late 20th-century and its discontents mirrors and contextualizes our current times.... Readers who value elegant style will savor Alcott’s musical sentences and dreamlike pacing.... Readers who enjoy literary fiction have a golden opportunity to not just look, but also to really see. Highly recommended.”
— Pittsburgh Post-Gazette

“A marvel of compression and controlled description…. Fay’s ambition, at the start of America Was Hard to Find, is to make life ‘happen more deeply inside her.’ Alcott’s novel is a finely calibrated machine that does the same for us.”
— BookForum

“[Alcott’s] prose has a way of finding the cinematic in the personal …. What hooks the reader are Alcott’s darts of wisdom and finely tuned observations…. Alcott’s narration is penetrating and elegant, but she gives her characters some of the wittiest and most screen-ready dialogue in contemporary fiction.”

“Kathleen Alcott writes with pulsating, intense prose, delivering an account of how lives can be meshed and torn apart.... Powerful.... America Was Hard to Find leaves readers wanting more of this story and everything else Alcott has written.”
— BookPage

“Alcott offers her own anti-war observation of Cold War America.... The elegance of Alcott’s writing poses an interesting contrast to her heroine’s inner life....  Alcott brings her full aesthetic gifts to bear.”
— Longreads

“Like Franzen or DeLillo, Alcott brings awe-inspiring exactitude and lyricism to her dive into three of America’s most iconic moments.... In her exquisite and poignant reimagining of historic events, Alcott dissects their impacts in a sweeping yet intimate saga that challenges assumptions and assesses the depths of human frustration.”
— Booklist (starred review)

“This richly ruminative novel refracts 30 years of American culture and history through the lives of [its] characters.... A sharp and moving reminder of the human dimension of even the most outsize historical events.”
— Publishers Weekly

“This novel is charged with the electricity of an intellect sharp and awake, and every instant of this story reverberates in us with the insistency of a deep longing. Amidst the noise of the world we live in, Alcott’s voice is the one I want to always hear.”

— Valeria Luiselli, author of The Lost Children Archive and Tell Me How it Ends


“America Was Hard to Find beats with the culturally savvy heart of a Rachel Kushner novel, extends the moral reach of a Philip Roth novel.... Alcott is a master of many tricks, and her novel is a marvel of style, information, intelligence, and humanity.”
— Heidi Julavits

“A story of mismatched lovers shocked by their bond, a chronicle of an adored but neglected son, and a passionate meditation on the ways in which we as both individuals and a collective subject others to the destructiveness we believe we deplore. Kathleen Alcott writes with a fierce tenderness.”
— Jim Shepard, author of The Book of Aron

“America Was Hard to Find moved me on every single page. Kathleen Alcott’s prose sings and stings as she crafts a wrenching counter-myth of America’s vaunt into the space age. This book tells the truth: the cost of conquest is always disintegration at home.”