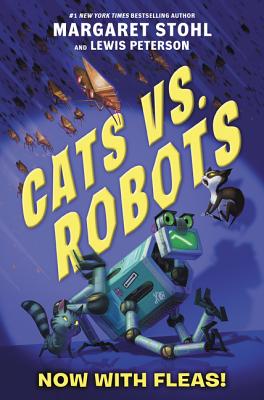 Book one of the Cats vs. Robots series was praised for its "mix of tech and kitties, STEM and heart" by the Bulletin of the Center for Children's Books.

In book two, the intergalactic war between the Feline Empire and Robot Federation has escalated to the brink of war. Cats and robots are preparing to converge on Earth and battle it out for the Infinity Engine. And the inventors and safekeepers of that powerful weapon? The Wengrod family.

Max, Min, their parents, and cousin Javi, all know the stakes are higher than ever as the fate of their planet rests on their shoulders.

The family creates an elite swarm of robotic fleas to attempt infiltrating both sides and halt attacks, but will peaceful persistence be enough? Will they ever rescue their friend Obi? Will Huggs and his sidekick, Vice President Parker P. Pants (VP P.P. Pants), with all their power and influence, prevail in the end?

Margaret Stohl and Lewis Peterson bring hilarity, heart, and the case for tolerance in the second book of the Cats vs. Robots series!

Kay Peterson is the illustrator of the Cats vs. Robots series.

Lewis Peterson is a game developer and robot builder. When not writing books or making games or building robots, he spends his time reading books and playing games and chasing cats with robots.

Praise For Cats vs. Robots #2: Now with Fleas!…

Praise for Book One - Cats Vs. Robots: This is War: “While comically contrasting the vast gulf between the mentalities of machines and cats, and (plainly) having great fun with names, the authors also work in significant gulf-bridging elements and developments. A STEM-friendly, high-interest adventure.”

“[A] mix of tech and kitties, STEM and heart.”
— The Bulletin of the Center for Children’s Books

“Maybe it takes a book about cats and robots to really celebrate being human.”

“Thank you, Stohl and Peterson, for uncovering the epic battle being waged in front of our very noses. Young readers will tear right through this hilarious and touching middle grade adventure—if their cat doesn’t tear it up first.”
— Pseudonymous Bosch, author of the Secret Series and the Bad Books

“I love this book as much as I love the family who made it. It had me at ‘Pounce’!”

“Cats vs. Robots is a rollicking and inventive story that manages to be epic and charming and completely endearing. A fizzy and exciting start to a unique new series.”
— Eliot Schrefer, author of the Lost Rainforest series

“The perfect book for anyone who likes cats or robots or books. In other words, everyone, because this book is perfect.”
— Brendan Reichs, author of Nemesis

“Irreverent and important, Cats vs. Robots is a rollicking adventure for the whole family to share.”
— Tahereh Mafi, author of the Shatter Me series

“Stohl and Peterson have crafted an engaging story of intergalactic war that is nevertheless sincere, bighearted, and filled with talking cats. Also, robots. It’s the kind of book I wish I could’ve read as a kid!”
— Ryan North, author of The Unbeatable Squirrel Girl