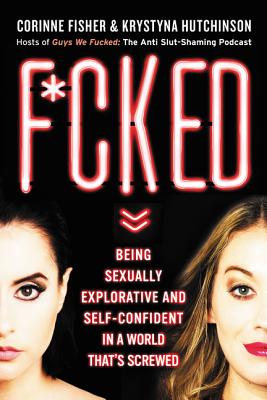 Being Sexually Explorative and Self-Confident in a World That's Screwed

Are You a Dirty, Nasty Slut? Or a Sexually Repressed Nightmare?

Regardless of your background or bedroom resume, someone or something has probably made you feel that way at some point. This was what Corinne Fisher and Krystyna Hutchinson discovered when they created the wildly popular Guys We Fucked: The Anti Slut-Shaming Podcast. What started as an outlet to interview—

You guessed it!—guys they'd fucked, quickly evolved into an enormous community of Fuckers around the world, and a place to share stories of kinks gone wild, trauma, assault, and the overall confusion among people who don't know what the fuck they are doing (in other words, everyone).

F*CKED brings these raw, ridiculous, and serious conversations from the podcast to the page. It is a guide to love and sex for anyone -- female, male, trans, or undecided—who is fed up with double standards and the stigma surrounding sexual beings. It is for anyone who has ever felt afraid to be their authentic self. Corinne and Krystyna won’t talk down to you or coddle you because you’re better than that. They won’t explain why he’s just not that into you, because it doesn’t fucking matter. This book will teach you how to deal with shit, brush your shoulder off, and move on. You'll also learn about:

Despite what Rom-Coms and magazines tell you, you can handle sexual exploration without the assistance of a man, a glass of rose, and a Xanax. More importantly, you’re fine all by yourself. This is the book Bridget Jones should’ve read instead of writing that shitty diary in the first place.


Praise For F*cked: Being Sexually Explorative and Self-Confident in a World That's Screwed…

“Corinne and Krystyna know more about fucking than I do—and I know *everything* about fucking. Buy this book, fuckers!” — DAN SAVAGE, author, sex columnist, and host of Savage Lovecast

“Sex is so much more than the missionary position. F*CKED is necessary literature for the people of tomorrow. Read this book, open your mind, & feel shame no more.” — AMBER ROSE, activist, author, model, entrepreneur, and pop culture maven

“Corinne and Krystyna do the most brilliant, honest and smart anti slut-shaming stuff. For their legions of fans, they do much more than entertain: they really help. They are great and so is this book.” — JON RONSON, documentary filmmaker and New York Times bestselling author of So You’ve Been Publicly Shamed

“Loved it. Whether you’re a nice Irish boy (like myself) or a lowlife pervert (like myself) or some combination, this book will help you get real (and like yourself).” — COLIN QUINN, comedian and author

“I smell a hit!” — DAVE ATTELL, comedian, actor, and writer

“Corinne and Krystyna are funny, sexy, and really sexy. They get to the heart of the matter. Or should I say the cock of the matter. Just read the damn book, and get ready to masturbate...or cry.” — ANDY DICK, comedian, actor, and television and film producer

“F*cked takes a hilarious, no-nonsense approach. This is the book you need if you’re looking for guidance on butt stuff, relationship faux pas, dealing with shaming, and much more.”
— Bustle

“Mixing dating advice with stories from their own sexcapades, comedians Fisher and Hutchinson expand on themes from their popular podcast in this unabashedly blunt guide to sex…. [T]heir main message that women should not be ashamed of their sexuality comes across loud and clear.” — Publishers Weekly

“What sets Fisher and Hutchinson apart is theirfrank and funny approach to taboo topics, and they brought this same attitude to F*CKED. The book is part manual, part confessional and part stand-up comedy. But it is all honest as fuck.” — Bust Magazine

“These ladies parlayed talking about sex into writing about sex. I don’t understand why. Writing seems like way more work. I haven’t been on the podcast because I tried to hook up with Krystyna years back and it didn’t go smoothly. So check out the book, I guess.” — Hannibal Buress, comedian and actor

“The book is their raw, arousing podcast put to paper, giving readers a mix of side-splitting and serious pillow talk.”   — Interview Magazine

Krystyna Hutchinson is a comedian, actress and writer with a BFA from Marymount Manhattan College. A regular in the New York City club circuit, she has performed in festivals and at sold-out clubs throughout the country. In addition to stand-up comedy, she has appeared in film, television, and Off-Broadway theater. She has trained with the Upright Citizens Brigade Theatre, The PIT, and Gary Austin Workshops. In her spare time, Krystyna likes to eat popcorn and sing Karaoke, her go-to song being 4 Non-Blondes' "What's Up?".

Corinne Fisher is a writer, comedian, and actor who has performed at the Boston Comedy Festival, the Women in Comedy Festival, the Laughing Devil Festival, and the She-Devil Festival. She holds a BFA from the School of Visual Arts, has been trained in the Stanislavski method by Joie Lee, and is a graduate of the Upright Citizens Brigade Theatre's prestigious improvisation training program. She loves ice cream and the Spice Girls.