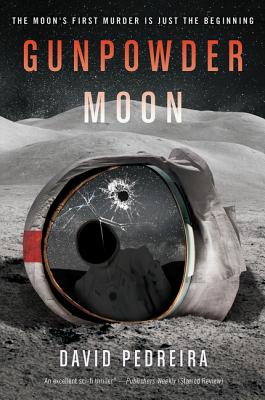 “Interesting quirks and divided loyalties flesh out this first novel in which sf and mystery intersect in a well-crafted plot...Pedreira’s science thriller powerfully highlights the human politics and economics from the seemingly desolate expanse of the moon. It will attract readers who enjoyed Andy Weir’s lunar crime caper Artemis.” -- Library Journal, starred review

A realistic and chilling vision of life on the Moon, where dust kills as easily as the vacuum of space…but murder is even quicker—a fast-paced, cinematic science fiction thriller, this debut novel combines the inventiveness of The Martian, the intrigue of The Expanse, and the thrills of Red Rising.

The Moon smells like gunpowder. Every lunar walker since Apollo 11 has noticed it: a burnt-metal scent that reminds them of war. Caden Dechert, the chief of the U.S. mining operation on the edge of the Sea of Serenity, thinks the smell is just a trick of the mind—a reminder of his harrowing days as a Marine in the war-torn Middle East back on Earth.

It’s 2072, and lunar helium-3 mining is powering the fusion reactors that are bringing Earth back from environmental disaster. But competing for the richest prize in the history of the world has destroyed the oldest rule in space: Safety for All. When a bomb kills one of Dechert’s diggers on Mare Serenitatis, the haunted veteran goes on the hunt to expose the culprit before more blood is spilled.

But as Dechert races to solve the first murder in the history of the Moon, he gets caught in the crosshairs of two global powers spoiling for a fight. Reluctant to be the match that lights this powder-keg, Dechert knows his life and those of his crew are meaningless to the politicians. Even worse, he knows the killer is still out there, hunting.

In his desperate attempts to save his crew and prevent the catastrophe he sees coming, the former Marine uncovers a dangerous conspiracy that, with one spark, can ignite a full lunar war, wipe out his team . . . and perhaps plunge the Earth back into darkness.

“What makes GUNPOWDER MOON stand out from most lunar novels is Pedreira’s emphasis on realism in the details that make up his world and the political structures that govern it.” — The Verge

“Could easily be the prequel to The Expanse, where natural resources off-world become the target of competing powers and one man is left in the middle to avoid catastrophe—a truly interesting read!” — New York Times bestselling author Bob Mayer

“In Gunpowder Moon, David Pedreira has crafted an excellent near-future thriller. This one’s got it all—realistic technology, an all-too-believable political conflict, and characters to care about—in a fast-paced story set amid the moon’s austere beauty.” — Linda Nagata, author of the Nebula-nominated The Red: First Light

“An excellent sci-fi thriller...The tension is especially strong in the novel’s last pages, leading to a conclusion that manages to be simultaneously cynical and hopeful. This is an exciting story with an unexpected depth—a solid winner.” — Publishers Weekly (starred review)

“Pedreira manages an impressive feat in his debut novel....bringing the all-too-familiar economic corruption and personal ruthlessness of capitalist exploitation to this foreign territory, and these subtle inflections elevate an already entertaining sci-fi mystery into a thought-provoking, unsettling work that will keep readers engaged.” — RT Book Reviews (4 1/2 stars)

“While the setting is entertaining, it does not eclipse the true nature of Pedreira’s debut: an intriguing murder mystery with a great lead that just happens to take place on the moon.” — Booklist

“Memorable visuals and well-executed action sequences mark this exciting foray into near-future hard sci-fi, which is at its best when framing the poignancy of the desire for peace.” — Kirkus Reviews

“Gripping and propulsive, this tightly plotted story of regular folks trying to do the right thing on the surface of the moon is one of my favorite SF novels of the last several months.” — Meghan McCain

“[Pedreira] makes an auspicious debut...He deftly handles one challenge of the genre: balancing the wealth of technical detail needed to build a future world with the engaging characters and headlong action needed for a compelling thriller. Gunpowder Moon is a satisfying blastoff.”   — Tampa Tribune

“This taut sci-fi thriller [...] will pull you face first into the struggle for survival on the moon.” — Rose Rundown

A former reporter for newspapers including the Tampa Tribune and the St. Petersburg Times, David Pedreira has won awards for his writing from the Associated Press, the Society of Professional Journalists, the Maryland-Delaware-D.C. Press Association, and the American Society of Newspaper Editors. He lives in Tampa, Florida.