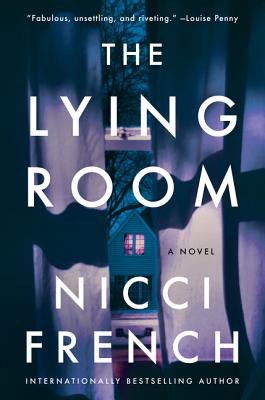 One little secret between a married woman, her lover, and a killer.

In this thrilling standalone from the internationally bestselling author of the Frieda Klein series, a married woman’s affair with her boss spirals into a dangerous game of chess with the police when she discovers he’s been murdered and she clears the crime scene of all evidence.

It should have been just a mid-life fling. A guilty indiscretion that Neve Connolly could have weathered. An escape from twenty years of routine marriage to her overworked husband, and from her increasingly distant children. But when Neve pays a morning-after visit to her lover, Saul, and finds him brutally murdered, their pied-à-terre still heady with her perfume, all the lies she has so painstakingly stitched together threaten to unravel.

After scrubbing clean every trace of her existence from Saul’s life—and death—Neve believes she can return to normal, shaken but intact. But she can’t get out of her head the one tormenting question: what was she forgetting?

An investigation into the slaying could provide the answer. It’s brought Detective Chief Inspector Alastair Hitching, and Neve’s worst fears, to her door. But with every new lie, every new misdirection to save herself, Neve descends further into the darkness of her betrayal—and into more danger than she ever imagined. Because Hitching isn’t the only one watching Neve. So is a determined killer who’s about to make the next terrifying move in a deadly affair….


Praise For The Lying Room: A Novel…

“[If you] are drawn to excellent psychological suspense... this is a book for your 'must list.'”
— Popular Culture Association

"Author Nicci French entertains readers with a chilling reminder that a lie is like a snowball rolling down-hill. With each new layer, it gains momentum that we might not be able to stop."
— Suspense Magazine

“Fans of domestic thrillers will be rewarded.”
— Publishers Weekly

“Having ended the saga of forensic psychologist Frieda Klein on a suitably harrowing note, French produces a stand-alone that’s just as suspenseful... The sorely tried heroine realizes, “I can’t trust anyone.” Neither can the expertly manipulated reader.”
— Kirkus Reviews

“This well-written, psychological thriller has a gripping plot that will satisfy fans of Val McDermid and Sharon J. Bolton.”
— Library Journal

"An enthralling and addicting novel.... Longtime fans of French will find their high expectations rewarded, while newcomers will be motivated to explore the author’s backlist. I envy their discovery."

"Such an enjoyable ride."
— Culteress

"This tense psychological thriller is full of twists and will keep you guessing who really did murder Saul. This page turner is all about Neve’s choices and their consequences."
— eMissourian.com

“Attention, fans of Tana French and Ruth Ware: meet your new obsession... The Lying Room ranks among French’s very best, a thriller as combustible as gunpowder, as propulsive as a jet engine. Psychological suspense at its brightest and most blazing.”
— A.J. Finn, #1 New York Times bestselling author of The Woman in the Window