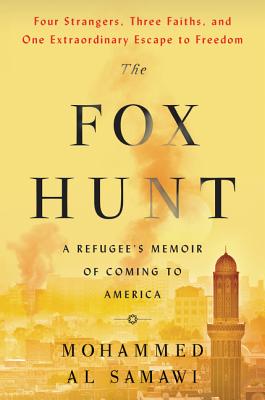 A Refugee's Memoir of Coming to America

The Fox Hunt tells one young man’s unforgettable story of his harrowing escape from Yemen's brutal civil war with the help of a daring plan engineered on social media by a small group of interfaith activists in the West.

Born in the Old City of Sana’a, Yemen, to a pair of middle-class doctors, Mohammed Al Samawi was a devout Muslim raised to think of Christians and Jews as his enemy. But when Mohammed was twenty-three, he secretly received a copy of the Bible, and what he read cast doubt on everything he’d previously believed. After connecting with Jews and Christians on social media, and at various international interfaith conferences, Mohammed became an activist, making it his mission to promote dialogue and cooperation in Yemen.

Then came the death threats: first on Facebook, then through terrifying anonymous phone calls. To protect himself and his family, Mohammed fled to the southern port city of Aden. He had no way of knowing that Aden was about to become the heart of a north-south civil war, and the battleground for a well-funded proxy war between Iran and Saudi Arabia. As gunfire and grenades exploded throughout the city, Mohammed hid in the bathroom of his apartment and desperately appealed to his contacts on Facebook.

Miraculously, a handful of people he barely knew responded. Over thirteen days, four ordinary young people with zero experience in diplomacy or military exfiltration worked across six technology platforms and ten time zones to save this innocent young man trapped between deadly forces— rebel fighters from the north and Al Qaeda operatives from the south.

The story of an improbable escape as riveting as the best page-turning thrillers, The Fox Hunt reminds us that goodness and decency can triumph in the darkest circumstances.

Mohammed Al Samawi was born in 1986 in Yemen. In his midtwenties, he became involved in interfaith groups promoting dialogue between Muslims, Christians, and Jews. In 2015, during the Yemeni Civil War, he fled from Aden to the United States. Since his entry to the United States, he has worked for several NGOs that promote peace and religious tolerance.


Praise For The Fox Hunt: A Refugee's Memoir of Coming to America…

“An urgent and timely book that reminds us of the common threads of the human experience.”
— Bruce Feiler, bestselling author of Walking the Bible and Abraham

“Poignant, captivating, disturbing, yet, in the end, hopeful, The Fox Hunt is a haunting and memorable book that illuminates the humanitarian tragedy of Yemen through the life of one of its refugees.”
— Rabbi David Saperstein, former US Ambassador-at-Large for International Religious Freedom

“This debut memoir is engaging and tragic yet full of hope as a worldwide effort is undertaken to save Al Samawi’s life. A triumphant work.”
— Library Journal (starred review)

“Nail-bitingly suspenseful. ... Al Samawi’s ultimate escape is inspiring, as is his determination to continue to work for international peace and understanding. Illuminating and essential reading.”
— Booklist, starred review

“Driving social change in the Arab world is a high stakes game, and Mohammed Al Samawi gambles with his life. A memoir wrapped in a thriller, THE FOX HUNT is one of those rare stories that’s as gripping as it is important.”
— BASSEM YOUSSEF, author of Revolution for Dummies and “The Jon Stewart of the Arabic World”

“Compelling. … Powerful. … An important story to tell. Gracious and generous, this personal account of a remarkable life is a reminder of how peace comes in small increments as the result of the work of committed individuals.”
— Kirkus Reviews

“Highly readable. ... At a time when our nation, out of our own fear and ignorance, is turning away those who would be among our finest citizens, if only we let them, it’s important to remember the world still desperately looks to us for freedom.”
— Chicago Sun-Times