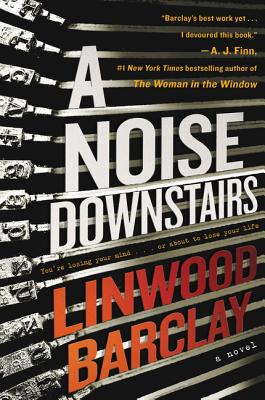 “Linwood Barclay’s novels – as intelligent as Michael Connelly’s, as compelling as Harlan Coben’s – never fail to astonish. A Noise Downstairs, his best work yet, is a cobra of a story: smooth, slippery, unnerving . . . and likely to strike when you least expect it. I devoured this book.” — A. J. Finn, #1 New York Times bestselling author of The Woman in the Window

“Vintage Barclay – A Noise Downstairs is an utterly compelling read with a twist you won’t see coming. I loved it!” — Shari Lapena, New York Times bestselling author of A Stranger in the House and The Couple Next Door

“[Barclay] does a masterful job of layering on the mysteries until we’re almost frantically turning the pages, impatient to find out what the hell is going on. A beautifully executed thriller.” — Booklist (starred review)

“Prepare to be blindsided by an ending you didn’t see coming. Barclay’s nerve-wracking tale will have readers scared to close their eyes at night.” — Library Journal

“A terrific edge-of-your-seat Hitchcockian psychological thriller that lives up to all the hype.” — New York Journal of Books

“Barclay is a master of manipulation. . . . Predictable becomes unpredictable in this compelling book that echoes the best of Harlan Coben.” — Associated Press

“[A] fast-paced psychological thriller . . . Barclay carefully conceals hidden motives and secret lives until the startling conclusion. Harlan Coben fans will find much to like.” — Publishers Weekly

“Creepy and compelling. . . . Barclay expertly weaves together the various plot strands to reach a wholly unexpected conclusion.” — The Guardian

“[A] twisty psychological tale . . . a satisfying and clever novel. The large cast and the story’s many moving parts perfectly set the reader up for the final climactic twist.” — Mystery Scene

“Predictable becomes unpredictable in this compelling book that echoes the best of Harlan Coben.” — Lisa Ko, author of The Leavers

Praise for No Time for Goodbye:
“A deliciously smart thriller, full of surprises and perfect pacing. I’m jealous I didn’t write it.” — Alafair Burke

“A high-speed emotional roller-coaster. The surprises will leave you breathless.” — Robert Crais

“No Time for Goodbye just flies off the page. It’s a one-sit thriller. You sit down with this book and you won’t get up until you’ve turned the last page.” — Michael Connelly

“One of the best thrillers of the year! Utterly riveting.” — Tess Gerritsen

“A terrific page-turner that keeps you in suspense until the very end. If you like Harlan Coben, you’ll love Linwood Barclay.” — Peter Robinson