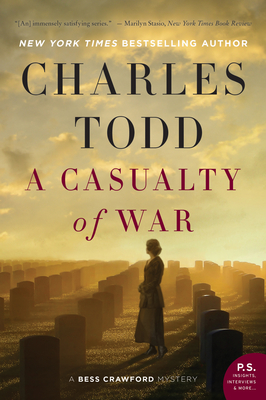 A Casualty of War

From New York Times bestselling author Charles Todd comes a haunting tale that explores the impact of World War I on all who witnessed it—officers, soldiers, doctors, and battlefield nurses like Bess Crawford.

Though the Great War is nearing its end, the fighting rages on. While waiting for transport back to her post, Bess Crawford meets Captain Alan Travis from the island of Barbados. Later, when he’s brought into her forward aid station disoriented from a head wound, Bess is alarmed that he believes his distant English cousin, Lieutenant James Travis, shot him. Then the Captain is brought back to the aid station with a more severe wound, once more angrily denouncing the Lieutenant as a killer. But when it appears that James Travis couldn’t have shot him, the Captain’s sanity is questioned. Still, Bess wonders how such an experienced officer could be so wrong.

On leave in England, Bess finds the Captain strapped to his bed in a clinic for brain injuries. Horrified by his condition, Bess and Sergeant Major Simon Brandon travel to James Travis’s home in Suffolk, to learn more about the baffling relationship between these two cousins.

Her search will lead this smart, capable, and compassionate young woman into unexpected danger, and bring her face to face with the visible and invisible wounds of war that not even the much-longed for peace can heal.

“A Casualty of War is another masterful work in this series, and I cannot recommend it enough.”
— Bookreporter.com

“Todd’s meticulous research... illustrates the toll the war has taken on the battle-weary military as well as the nurses and doctors, the sacrifices of the residents, [and] the citizens’ valiant struggle to maintain a sense of normalcy. . . . . A vivid and personal look at WWI.”
— SouthFlorida.com

“Intensely personal, as all great stories should be.”
— Anne Perry, Internationally Bestselling Author

“Harsh period attitudes toward traumatic stress and the exhaustion of a long war add poignancy to Todd’s satisfying puzzle of identity and inheritance.”
— Publishers Weekly

“[Readers] will love the heroine for her courage and determination.”
— Kirkus Reviews

“The latest Crawford mystery is rich in character and period detail, with a solidly constructed story that should keep readers immersed in the action.”
— Booklist

“As always in this immensely satisfying series, Todd heightens the mystery by setting it within a war-shattered world of battered villages, barren farms and broken people.”
— Marilyn Stasio, New York Times Book Review on THE SHATTERED TREE

Praise for The Shattered Tree: “Admirable, courageous and occasionally reckless, Bess ranks among the best of fictional amateur sleuths. [Todd] again creates a thought-provoking novel that evokes the terrors and suspicions of war.”
— Richmond Times-Dispatch

“A superb whodunit—just when you think you have it figured out, Todd throws a curve—and a moving evocation of a world at war.”
— Richmond Times-Dispatch

1. A Casualty of War takes place in 1918 as the Great War comes to an end, but soldiers and civilians alike are still struggling with unbearable losses and a changed England.  Has reading this novel given you a new appreciation of the lasting wounds conflict leaves in its wake on all those involved?

2. Bess encounters many soldiers suffering from post-traumatic stress disorder, a condition that would not be fully acknowledged in the medical community until late in the twentieth century.  What is your impression of the attitudes toward “shell shock” during the Great War, and the fates of the soldiers experiencing it?

3. Bess and Simon Brandon have known each other for many years and are very close.  Do you think her acceptance of him in the family—she has said he is the son her father never had—has made it difficult for her to see him in any other light?  Should she?  Is a romance between them necessary to the story?  Or would it spoil the series?

4. Why do you think Bess feels so much responsibility to help Captain Travis?  She feels guilty for mentioning his cousin while he is struggling to identify his assailant.  But she also knew him beforehand, knew the man he was. Or is it seeing him tied to his bed in a windowless room?  Perhaps it’s a need to find out what is really true?

5. Bess gently refuses Sergeant Lassiter’s proposal, insisting there is too much work to be done to consider herself. But as the Great War is ending, what do you think drove her most to decline his offer?  She would have to resign from nursing if she said yes. Does that affect her decision?  Should she have told him to wait?

6. The Armistice brings the fighting to a close.  Why does Bess feel so strongly that her work isn’t done?   She became a nursing Sister to save as many men as she could, and she has done that.  Do you think this is true to the nursing profession, to stay on to help those who will never recover fully?

7. Has this series helped you understand the Great War, and the sacrifices that were made by so many both on the battlefield and on the home front?  What were your views before you read these books?  And after reading them?

8. What is your impression of Mrs. Travis’s character? Do you think it is unfair of her to hold the past against the Captain? What do you think drives her most to ignore her son’s wishes in the will?

9. Do you think Bess and Simon believe the fortune teller who explains the dream she has about James Travis? What do you make of her claim?

10. Did the identity of the killer surprise you? Whom did you most suspect throughout the novel, and why?

11. At the end of the novel, the world is on the precipice of massive change.  And Bess too will eventually have to return to civilian life.  What do you think lies in store for her next?  What is there in her character that you believe will guide her toward the future?