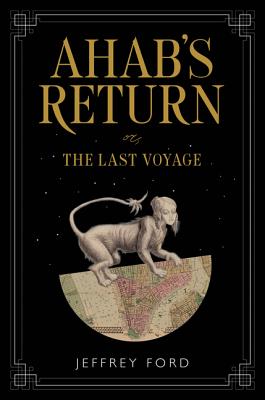 or, The Last Voyage

“Jeffrey Ford is one of the few writers who uses wonder instead of ink in his pen.” – Jonathan Carroll

A bold and intriguing fabulist novel that reimagines two of the most legendary characters in American literature—Captain Ahab and Ishmael of Herman Melville’s Moby-Dick—from the critically acclaimed Edgar and World Fantasy award-winning author of The Girl in the Glass and The Shadow Year.

At the end of a long journey, Captain Ahab returns to the mainland to confront the true author of the novel Moby-Dick, his former shipmate, Ishmael. For Ahab was not pulled into the ocean’s depths by a harpoon line, and the greatly exaggerated rumors of his untimely death have caused him grievous harm—after hearing about Ahab’s demise, his wife and child left Nantucket for New York, and now Ahab is on a desperate quest to find them.

Ahab’s pursuit leads him to The Gorgon’s Mirror, the sensationalist tabloid newspaper that employed Ishmael as a copy editor while he wrote the harrowing story of the ill-fated Pequod. In the penny press’s office, Ahab meets George Harrow, who makes a deal with the captain: the newspaperman will help Ahab navigate the city in exchange for the exclusive story of his salvation from the mouth of the great white whale. But their investigation—like Ahab’s own story—will take unexpected, dangerous, and ultimately tragic turns.

Told with wisdom, suspense, a modicum of dry humor and horror, and a vigorous stretching of the truth, Ahab’s Return charts an inventive and intriguing voyage involving one of the most memorable characters in classic literature, and pays homage to one of the greatest novels ever written.


Praise For Ahab's Return: or, The Last Voyage…

“Unusual and gripping. . . .Fans of successful reimaginings of literary classics. . .will be entertained.”
— Publishers Weekly

“It takes chutzpah to revive one of the most vivid yet most unknowable characters in all literature, let alone to place him in a story that celebrates its own essential pulpiness. . . . Jeffrey Ford has that chutzpah . . .[M]arvelous.”
— SciFi Magazine (”A” rating)

“[A]n imaginary sequel to an imaginative work, a virtual or alternate vision. … Primed for adventure, Harrow guides [Ahab] through New York’s seething underworld on his quest and perchance to find fresh material. Of that, readers are dealt a-plenty.”
— Fredericksburg Free Lance-Star

“Ford knows how to tell a story, whatever the genre, and how to get out of its way and when to stop, and here that makes for a great few hours between the covers. … Sign on for this one; it’s well worth the trip.”
— Washington Independent Review of Books

“This is an adventure worthy of the captain. … This fast-paced, occasionally acerbic, often bloody, but always entertaining story is an homage to Moby-Dick and a fitting continuation/conclusion of Ahab’s story.”
— New York Journal of Books

Praise for The Shadow Year:
“Jeffrey Ford is one of the few writers who uses wonder instead of ink in his pen.”
— Jonathan Carroll, author of The Wooden Sea

“Properly creepy, but from time to time deliciously funny and heartbreakingly poignant, too. For those of you—and you know who you are—who think the indispensable element for good genre fiction is good writing, this is not to be missed.”

“Superb, heartbreaking, and masterfully written. . . . It’s proof of Jeffrey Ford’s narrative power that, ultimately, the distinction [between real and invented] doesn’t much matter. His made-up world trumps ours.”
— Magazine of Science Fiction and Fantasy

“A work of episodic beauty and mercurial significance.”
— Locus

“Think Ray Bradbury’s “Green Town” stories, Harper Lee’s To Kill a Mockingbird and Stephen King’s The Body (made into the film Stand by Me) and you get an idea of the tone of Ford’s latest fine work. Grade: A”
— Denver Rocky Mountain News