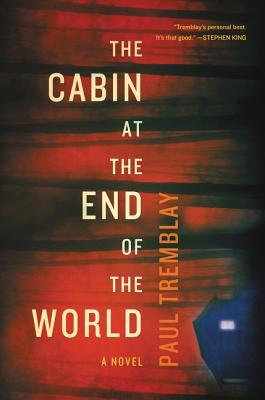 One afternoon, as Wen catches grasshoppers in the front yard, a stranger unexpectedly appears in the driveway. Leonard is the largest man Wen has ever seen, but he is young, friendly, and he wins her over almost instantly. Leonard and Wen talk and play until Leonard abruptly apologizes and tells Wen, “None of what’s going to happen is your fault.” Three more strangers then arrive at the cabin carrying unidentifiable, menacing objects. As Wen sprints inside to warn her parents, Leonard calls out: “Your dads won’t want to let us in, Wen. But they have to. We need your help to save the world.”

“Read Paul Tremblay’s new novel, The Cabin at the End of the World, and you might not sleep for a week. Longer. It will shape your nightmares for months—that’s pretty much guaranteed. That’s what it’s built for. And there’s a very, very good chance you’ll never get it out of your head again.” — NPR

“The Cabin at the End of the World is a clinic in suspense, a story that opens with high-wire tension and never lets up from there. The blend of human horror and human heart is superb. Paul Tremblay is rapidly becoming one of my favorite suspense writers.” — Michael Koryta, New York Times bestselling author