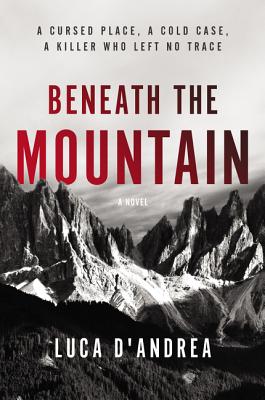 “This thriller starts off with a shock and then turns in an entirely different direction that will leave you torn between wishing the troubled filmmaker Salinger will drop his obsessive pursuit of a decades-old mystery and praying he doesn't so you can see how the mystery unravels. D'Andrea's characters and their relationships draw you into the story of how Salinger's relentless pursuits affect those around him. This is a cleverly crafted thriller with twists and turns that will keep you guessing until the end.”
— Brent Bunnell via Jill Hendrix, Fiction Addiction, Greenville, SC
View the List

In Luca D’Andrea’s atmospheric and brilliant thriller, set in a small mountain community in the majestic Italian Dolomites, an outsider must uncover the truth about a triple murder that has gone unsolved for thirty years.

New York City native Jeremiah Salinger is one half of a hot-shot documentary-making team. He and his partner, Mike, made a reality show about roadies that skyrocketed them to fame. But now Salinger’s left that all behind, to move with his wife, Annelise, and young daughter, Clara, to the remote part of Italy where Annelise grew up—the Alto Adige.

Nestled in the Dolomites, this breathtaking, rural region that was once part of the Austro-Hungarian Empire remains more Austro than Italian. Locals speak a strange, ancient dialect—Ladino—and root for Germany (against Italy) in the world cup. Annelise’s small town—Siebenhoch—is close-knit to say the least and does not take kindly to out-of-towners. When Salinger decides to make a documentary about the mountain rescue group, the mission goes horribly awry, leaving him the only survivor. He blames himself, and so—it seems—does everyone else in Siebenhoch. Spiraling into a deep depression, he begins having terrible, recurrent nightmares. Only his little girl Clara can put a smile on his face.

But when he takes Clara to the Bletterbach Gorge—a canyon rich in fossil remains—he accidentally overhears a conversation that gives his life renewed focus. In 1985, three students were murdered there, their bodies savaged, limbs severed and strewn by a killer who was never found. Although Salinger knows this is a tightlipped community, one where he is definitely persona non grata, he becomes obsessed with solving this mystery and is convinced it is all that can keep him sane. And as Salinger unearths the long kept secrets of this small town, one by one, the terrifying truth is eventually revealed about the horrifying crime that marked an entire village.


Completely engrossing and deeply atmospheric, Beneath The Mountain is a thriller par excellence.

“Can be compared (with no fear of hyperbole) to Stephen King and Jo Nesbø.”—La Repubblica


Praise For Beneath the Mountain: A Novel…

“…. D’Andrea’s story sweeps away the reader in an avalanche of life-threatening revelations that make Beneath the Mountain a complete success as a debut thriller.”
— New York Journal of Books

“Beneath this compelling tale, however, is a far more powerful and emotional study of grief and trauma… Each layer of memory is exposed and explored, and though that stalls the mystery in places, it renders the overall story that much more powerful, forcing readers to grapple with the real-life implications of a story that is rife with supernatural overtones.”
— RT Book Reviews

“Beneath the Mountain is a grand tale that appeals on many levels.”
— Booklist (starred review)

“Can be compared (with no fear of hyperbole) to Stephen King and Jo Nesbø.”
— La Repubblica

“…. a thrilling narrative that, most certainly belongs on every bestseller list – if not on every thriller lover’s bookshelf.”
— June’s Literary Blog

“A a well-developed and thoughtfully plotted feast of place and words for the reader in search of a thrilling novel that unravels in a different kind of setting.”
— JD DeHart Reading and Literature Resources

Luca D’Andrea lives with his family in Bolzano, Italy, where he was born in 1979. Sanctuary is his second thriller. His first, Beneath the Mountain, was published in thirty countries.