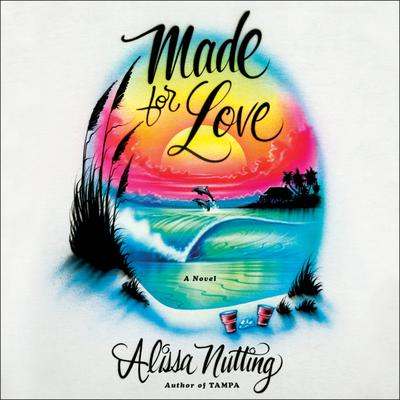 Made for Love (Digital Audiobook)

“I don't think I've gotten this much sheer pleasure from a book in a long while. Made for Love is freaking off-the-wall bonkers in the best way. We follow Hazel, a woman on the edge who recently escaped from her top-of-the-tech-world psycho of a husband (whom, she fears, desires to place a chip in her brain so that they may 'meld' consciousnesses), as she battles through hyper-surveillance for a life off the grid. Along the way, she meets a truly delightful cast of characters, gets into some absurd hijinks, and works through the piles of garbage the world has tossed her way. Ditch the jet skis - this is all the summer fun you're going to need.”
— Molly Moore (E), Book People, Austin, TX
View the List

Hazel has just moved into a trailer park of senior citizens, with her father and Diane—his extremely lifelike sex doll—as her roommates. Life with Hazel’s father is strained at best, but her only alternative seems even bleaker. She’s just run out on her marriage to Byron Gogol, CEO and founder of Gogol Industries, a monolithic corporation hell-bent on making its products and technologies indispensable in daily life. For over a decade, Hazel put up with being veritably quarantined by Byron in the family compound, her every movement and vital sign tracked. But when he demands to wirelessly connect the two of them via brain chips in a first-ever human “mind-meld,” Hazel decides what was once merely irritating has become unbearable. The world she escapes into is a far cry from the dry and clinical bubble she’s been living in, a world populated with a whole host of deviant oddballs.

As Hazel tries to carve out a new life for herself in this uncharted territory, Byron is using the most sophisticated tools at his disposal to find her and bring her home. His threats become more and more sinister, and Hazel is forced to take drastic measures in order to find a home of her own and free herself from Byron’s virtual clutches once and for all. Perceptive and compulsively readable, Made for Love is at once an absurd, raunchy comedy and a dazzling, profound meditation marriage, monogamy, and family.

Alissa Nutting is an assistant professor of creative writing at John Carroll University. She is the author of the award-winning collection of stories Unclean Jobs for Women and Girls. Her work has appeared in the New York Times; O, The Oprah Magazine; Tin House; Fence; and Bomb, among other venues. This is her first novel. She lives in Ohio.