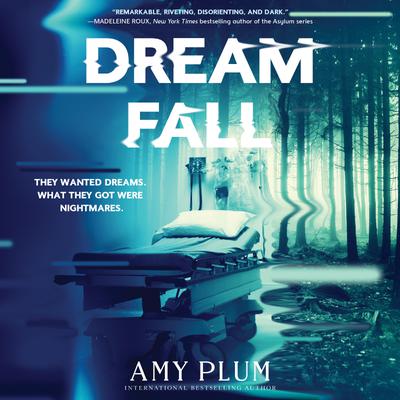 A Nightmare on Elm Street meets Inception in this gripping psychological thriller from international bestselling author Amy Plum. Seven teenagers who suffer from debilitating insomnia agree to take part in an experimental new procedure to cure it because they think it can’t get any worse. But they couldn’t be more wrong.

When the lab equipment malfunctions, the patients are plunged into a terrifying dreamworld where their worst nightmares have come to life—and they have no memory of how they got there. Hunted by monsters from their darkest imaginations and tormented by secrets they’d rather keep buried, these seven strangers will be forced to band together to face their biggest fears. And if they can’t find a way to defeat their dreams, they will never wake up.

Dreamfall is perfect for fans of dark and edgy young adult novels from authors like Danielle Vega, Natasha Preston, Kendare Blake, and Madeleine Roux. It is the first book in a spine-tingling duology full of action, suspense, and horror that's sure to keep readers on the edge of their seat until the very last page.

Amy Plum is the international bestselling author of After the End and the Die for Me series. She spent her childhood in Birmingham, Alabama, her twenties in Chicago and Paris, and several more years in London, New York, and the Loire Valley. Now she lives in Paris and swears she'll never move again.