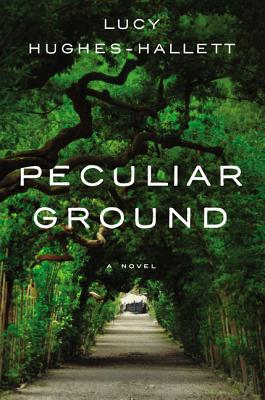 "Unlike anything I’ve read. With its broad scope and its intimacy and exactness, it cuts through the apparatus of life to the vivid moment. Haunting and huge, and funny and sensuous. It’s wonderful."—Tessa Hadley

The Costa Award-winning author of The Pike makes her literary fiction debut with an extraordinary historical novel in the spirit of Wolf Hall and Atonement—a great English country house novel, spanning three centuries, that explores surprisingly timely themes of immigration and exclusion.

It is the seventeenth century and a wall is being raised around Wychwood, transforming the great house and its park into a private realm of ornamental lakes, grandiose gardens, and majestic avenues designed by Mr. Norris, a visionary landscaper. In this enclosed world everyone has something to hide after decades of civil war. Dissenters shelter in the woods, lovers rendezvous in secret enclaves, and outsiders—migrants fleeing the plague—find no mercy.

Lucy Hughes-Hallett conjures an intricately structured, captivating story that explores the lives of game keepers and witches, agitators and aristocrats; the exuberance of young love and the pathos of aging; and the way those who try to wall others out risk finding themselves walled in. With poignancy and grace, she illuminates a place where past and present are inextricably linked by stories, legends, and history—and by one patch of peculiar ground.

Lucy Hughes-Hallett is the author of The Pike: Gabriele D’Annunzio, which won the Samuel Johnson Prize, the Duff Cooper Prize, the Political Book Award for Political Biography of the Year, and the Costa Biography Award; Cleopatra: Histories, Dreams and Distortions, which won the Fawcett Prize and the Emily Toth Award; and Heroes: Saviours, Traitors and Supermen. She lives in London.


Praise For Peculiar Ground: A Novel…

“Full of drama, vivid characters, wit, gorgeous writing and fascinating botanical, religious and social detail.... Peculiar Ground, with its witches and aristocrats, its highly educated men, women and children and its gradations of every conceivable social type between upstairs and downstairs, is a grand spectacle.”

“Sophisticated and erudite…. Ms. Hughes-Hallett is a natural heir to A.S. Byatt, delivering a densely patterned novel that shimmers with human interest as it probes our cultural story.”
— Wall Street Journal

“Rather more than your usual English country house novel.  Think of it as a saga of a place depicted in gorgeous prose…. With its clever juxtaposition of past and present and its mediation of time and change, Peculiar Ground is reminiscent of Tom Stoppard’s play Arcadia.”
— Minneapolis Star Tribune

“Unlike anything I’ve read. With its broad scope and its intimacy and exactness, it cuts through the apparatus of life to the vivid moment. Haunting and huge, and funny and sensuous. It’s wonderful.”
— Tessa Hadley

“Vast in scope but intimate in its details. A first novel stunning for both its historical sweep and its elegant prose.”
— Kirkus, starred review

“An enjoyable, sprawling epic debut…. Hughes-Hallett effectively expands the domestic drama to touch on class resentment, religious conflict, and international affairs. Her Wychwood is a remarkable, ambivalent creation… and readers will delight at strolling its grounds under her guidance.”
— Publishers Weekly

“Give this to readers who enjoy the works of A.S. Byatt.”
— Booklist

“Peculiar Ground is so clever and beautifully written, it gripped me from start to end. I abandoned work and family to finish it.”
— Roddy Doyle

“Lucy Hughes-Hallett’s novel is immensely vivid, full of rich and deeply imagined life, and glowing with energy. Her Wychwood estate is utterly real, her characters (both seventeenth- and twentieth-century) entirely convincing, and the story moves with a masterful assurance. There’s a calm virtuosity in the language that I admired a great deal. I just enjoyed it so very much.”
— Philip Pullman
or
Buy Here
Copyright © 2020 American Booksellers Association