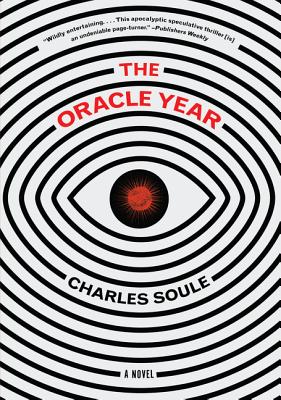 He's also making a lot of high-powered enemies, from the President of the United States and a nationally prominent televangelist to a warlord with a nuclear missile and an assassin grandmother. Legions of cyber spies are unleashed to hack the Site—as it's come to be called—and the best manhunters money can buy are deployed not only to unmask the Oracle but to take him out of the game entirely. With only a handful of people he can trust—including a beautiful journalist—it's all Will can do just to survive, elude exposure, and protect those he loves long enough to use his knowledge to save the world.

“Here’s my prediction: this book will seep into your soul. The Oracle Year is about knowing the future—and what you do with that knowledge. As you meet Will Dando, you can’t help but reevaluate yourself. Get ready for the best kind of fun.” — Brad Meltzer, New York Times bestselling author of The Inner Circle

“Anyone will enjoy this comically fast-paced tale about Will Dando, who wakes up one day with 108 wacky and world-shattering predictions.” — Washington Post

“Soule’s The Oracle Year is like a sliding puzzle, except every time you think you can predict what the image will be, new pieces slide into place. It’s a wonderfully mysterious thriller that proves Soule is as much a master of prose as he is of comic book script.” — Chuck Wendig, New York Times bestselling author of Invasive and Blackbirds

“A thrilling, noodle-bending adventure that keeps readers guessing until the very end.” — Kirkus

“With The Oracle Year, Soule has created something truly special, both a globe-spanning thriller, and a razor-witted look at the modern human condition. The Oracle Year is easily one of the best debuts I’ve read in years.” — Scott Snyder, New York Times bestselling author of Wytches, Batman, and A.D.

“This volatile and unpredictable novel will entertain and keep you guessing until the very end.” — New York Journal of Books

“The Oracle Year has all of the elements of a straight-ahead action thriller, while exploring faith, politics, and personal responsibility with heart and a sly, satirical wit straight out of the funny pages.” — Barnes & Noble Sci-Fi Blog