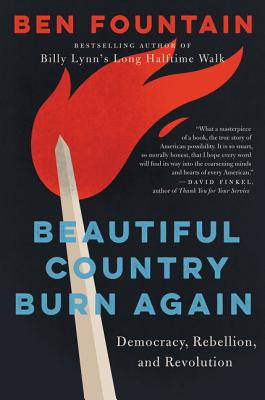 “There may be no writer alive today who better captures the manic, fevered, paranoid style in 21st-century America than Ben Fountain.” — Rolling Stone

“Brilliantly argued and authoritatively illustrated.... There’s no one I would rather read on Where We Are Now.... If this country can find writers like Ben Fountain to chronicle its most miserable hours, it can’t be all bad. — Los Angeles Review of Books

“What on earth happened in and to the United States in 2016? And why did it happen? In “Beautiful Country Burn Again,” Fountain confronts both these riddles in creative and provocative ways that force a reader to think hard about the sudden disappearance of familiar patterns of politics and government.” — Washington Post

“[Fountain] is not only a sharp writer but an astute observer of the human condition. And, it turns out, he’s got a sharp mind for politics and history, too.... The book is a captivating read — often humorous, infuriating, and depressing all at the same time.” — Texas Observer

“The reality of US politics outdistanced the wildest extravagances of imagination a long time ago, which is only one of a hundred deft, discomfiting points Fountain makes. In today’s superheated political climate, fairness and perspective are hard to come, but Fountain manages to take a relatively measured view.” — Boston Globe

“As a stylist, Fountain combines the talents of Ambrose Bierce, Norman Mailer, and Hunter Thompson.... A penetrating critique of a contemporary American politics thoroughly corrupted by money.... Ben Fountain’s voice—enraged, unsparing, unrelenting, acutely attuned to hypocrisy, and suffused with wit—invests his testimony with an authority that commands respect.” — Commonweal

“Fountain vents [his] grievances with eloquence and bite.... steeped in history as well as outrage. — Dallas News

“Pithy and profound.... Fountain’s mix of salient lessons from the past and essential guideposts for the future is a must-have addition to the “how did we get here” canon of political scrutiny in and of the age of Trump.”
— Booklist (starred review)

“Fountain’s vivid prose shows the novelist’s knack for revealing character through gesture and physicality.... Whip-smart and searching in its indictment of cant and falsity, this is perhaps the best portrait yet of an astounding election.” — Publishers Weekly (starred review)

“[Fountain’s] words are emotional and powerful. While Donald Trump and those who enable him are primary targets, no one escapes his criticism, including much of the American electorate. Beautiful Country Burn Again has the potential to arm the body politic with their greatest weapon--knowledge.” — Shelf Awareness

“Sometimes it takes a novelist to capture a world gone mad...With clarity of mind and the most observant of eyes, Fountain gives us a memorable and unique portrait of...an American moment which is likely to shape us for far longer than any of us would like to contemplate.” — Jon Meacham, author of The Soul of America: The Battle for Our Better Angels

“A masterpiece of a book, the true story of American possibility...So smart, so funny, so well-researched, so brilliantly argued, so scathing and at times shaming and, most of all, morally honest...I hope every word will find its way into the coarsening minds and hearts of every American.” — David Finkel, author of Thank You For Your Service

“Thank God for Ben Fountain...Here is a quirky truth teller, a creative, who is attempting to steer America on a path that will bring some goodness to the most of us. Beautiful Country Burn Again is...written with a novelist’s skill of heart and with a researcher’s expertise.” — Tiphanie Yanique, author of Land of Love and Drowning

“The force and beauty of Fountain’s writing, his clear-eyed fury, his commitment to what is great about the American idea, make for exhilarating reading. A book for right now, and for all the fires next time.” — Alma Guillermoprieto, author of Dancing with Cuba: A Memoir of the Revolution

“Fountain brings a unique and thoughtful assessment to the subject matter. With fluid, captivating writing and hilarious quotes and descriptions, he details each candidate’s foibles.... [Fountain] clearly illustrates how a cultural undercurrent of divisive economic interests... is once again driving a populist surge against the status quo.” — Seattle Times