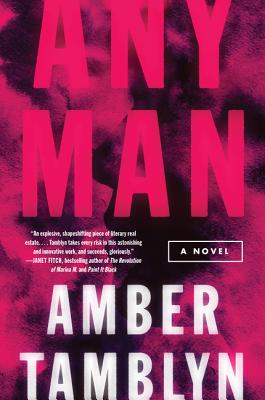 In this electric and provocative debut novel, Tamblyn blends genres of poetry, prose, and elements of suspense to give shape to the shocking narratives of victims of sexual violence, mapping the destructive ways in which our society perpetuates rape culture.

A violent serial rapist is on the loose, who goes by the name Maude. She hunts for men at bars, online, at home— the place doesn’t matter, neither does the man. Her victims then must live the aftermath of their assault in the form of doubt from the police, feelings of shame alienation from their friends and family and the haunting of a horrible woman who becomes the phantom on which society projects its greatest fears, fascinations and even misogyny. All the while the police are without leads and the media hound the victims, publicly dissecting the details of their attack.

What is extraordinary is how as years pass these men learn to heal, by banding together and finding a space to raise their voices. Told in alternating viewpoints signature to each voice and experience of the victim, these pages crackle with emotion, ranging from horror to breathtaking empathy.

As bold as it is timely, Any Man paints a searing portrait of survival and is a tribute to those who have lived through the nightmare of sexual assault.


Praise For Any Man: A Novel…

“Poet and actress Amber Tamblyn’s debut novel, Any Man blends prose and poetry in a searing exploration of sexual aggression.Tamblyn is able to shed a harsh new light on how real, actual, pervasive sexual offenses are treated (and mistreated) in this country, and the world writ large.”
— Vanity Fair, Summer’s Ultimate Fiction List

“Get ready to hold your breath. Amber Tamblyn’s Any Man is a genre-bending gender-bending brilliant blow torch of a debut novel amplifying the complexities of sexual violence and the radical costs of survival. At the center of the novel is a serial rapist named Maude who reduces the men in her path to objects of prey. We’re not used to thinking of this equation, and that’s the point. This is the story of a monstrous woman made from the darkness inside all of us, a woman who meets patriarchy head-on and shreds it, leaving men traveling the journey that women must make every day of their lives--not the hero’s journey, but the victim’s. Not to emerge heroic and victorious, but to emerge from shame and violence with empathy, compassion, and the radical ability to endure together. This book changes everything.”
— Lidia Yuknavitch, bestselling author of THE BOOK OF JOAN

“Amber Tamblyn’s debut novel, Any Man, is a beautifully written and carefully curated examination of toxic masculinity, rape culture and our society as a whole…a sprawling conversation about sexual assault and how prevalent it is in our society, regardless of gender….Everything about this novel is raw and exposed...this is the time to stop denying these things are out there just because hearing, seeing or reading about them makes us want to turn the other way—and that is what Tamblyn has achieved in this novel, a way to make our eyes stay on the page.”
— Paperback Paris

Any Man is a breathtaking gut-punch of a novel. Here is the cost of sexual violence: our bodies, our minds, our culture. Flipping the typical narrative of woman-as-victim, Tamblyn follows six different men, each of whom has been viciously attacked by a serial rapist named Maude. In a masterful exploration of literary form, we follow them through poetry, journals, talk shows, group therapy sessions, internet chat rooms, letters, voicemails, and an extended Twitter search so real and right now the page became a screen in my hands. From the first lightning-bolt sentence it felt impossible to put down. But I had to put it down. I had to breathe. I had to interrogate my own heart. Real talk: this subject matter is hard as hell. It hurts. It’s so much easier not to look, to pretend such violence doesn’t exist even when we know--we know. we know and know and know--that it does. Enough, Tamblyn is saying. It’s supposed to hurt. That’s how we heal.
— Megan Stielstra, The Wrong Way to Save Your Life

““In her first novel, poet Tamblyn (Bang Ditto) nimbly flips the usual dynamic of sexual predation, writing about a female serial rapist who preys on men.. The suspense of whether Maude will be apprehended and her motives understood propels this powerful meditation on the horrors of rape culture.”
— Publishers Weekly

Amber Tamblyn is an author, actress and director. She's been nominated for an Emmy, Golden Globe and Independent Spirit Award for her work in television and film. She is the author of three books of poetry including the critically acclaimed best seller, Dark Sparkler.

Her debut novel Any Man will be released in June of 2018 on Harper Perennial and a book of non-fiction essays for Crown in 2019. Most recently she wrote and directed the feature film, “Paint it Black”, based on the novel by Janet Fitch, starring Alia Shawkat, Janet McTeer and Alfred Molina, currently on Netflix. She reviews books of poetry by women for Bust Magazine, is a contributing writer for The New York Times and is a founding member of Time’s Up. She lives in New York.